Of men who are Gods

I stood at the finish line with an odd mix of feelings. But when I saw, one after another, a succession of worn-out, threadbare men and women pass me by, it became clearer to me. I was not at the finish line of the 2017 Dakar. I was standing at one of many temples we build to the human spirit. An infinitely resilient thing that powers our civilisation, our lives and drives us to do the things we do. 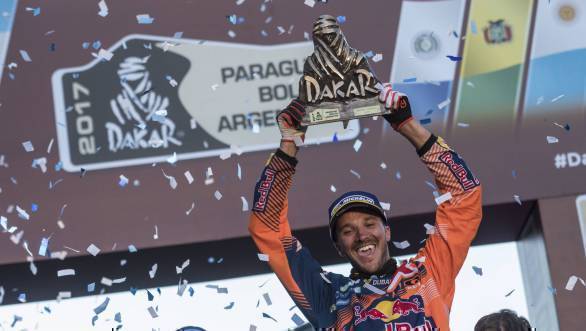 The finish line for the 2017 Dakar was a reasonably simple affair. The enormous podium is constructed outside the Argentine Automobile Association in the affluent Palermo district of Buenos Aires. It's a reasonably wide road by BA (as the city is called for the most part) standards - they do boast the widest avenue of all on Earth. Across the road runs a park which is convenient, as you will see.

The road is blocked off and the organisers - an impossibly efficient team of professionals - make a barriered-off double-lane that runs from the podium to the end of the road at Plaza Francia about a kilometre and half distant. 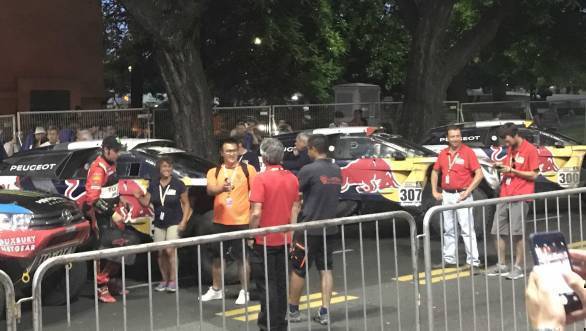 A substantial crowd will line these barriers from about 4pm and the vehicles will keep arriving up to sunset, roughly 7:30-8pm. This crowd is worthy of comment. There are obviously the men - we like our motorsport. But then there are the families. Take the quartet across the fence from us, seated patiently on the concrete sidewalk that marks the edge of the park, for example. The mother, a young, pretty 30-something was with a 6-year old, her husband and mother. The kid and the husband were obviously excited as the Dakar race beasts went past them. But the mother's cheering, laughter and the sheer sense of how good a time she was having was infectious! And I could give you example after example of how the Dakar is part of the BA blood work as it were. 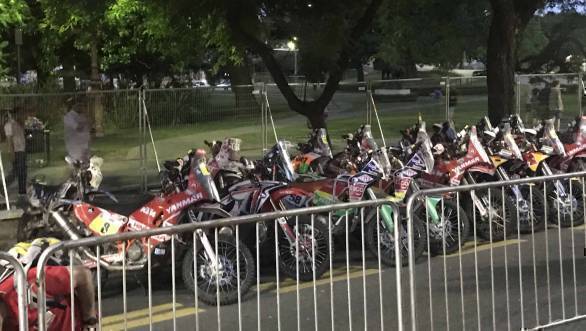 The event starts simply enough. You line the barriers in the hot sun and the first of the bikes come through. The riders are not helmeted, as a rule, as they trundle slowly past the crowds to the end of the road. They will park their bikes (and quads, cars and trucks) there and make the long but exultant trudge back to the podium, behind which, I imagine, are the hospitality areas.

The beauty of the Dakar lines their faces in ways that the world's top makeup companies would die to do. These are, by and large, not youngsters. Their faces show their age, but it's their eyes - in their eyes shines a spirit that makes them at once human, and yet, godlike. It's as if while we were led around by the need to live and pursue our passions, they grabbed theirs by the scruff of its neck and bent it to their will.

You think you are a survivor until you see the people who finish the Dakar. They're thrivers. A class of people who look hardship in the eye, smile at the opportunity, then proceed to wring the living hell out of the hardship.

All I did that afternoon was watch these gods ride or drive down the path and then walk back smiling and waving. Some were in introspective moods, looking more inwards than out. Others were enjoying the attention and stopping for, as one man put it, "One million and one..." What are you counting sir? "Selfies!" And a big Russian bellow of a laugh echoes up and down the road. 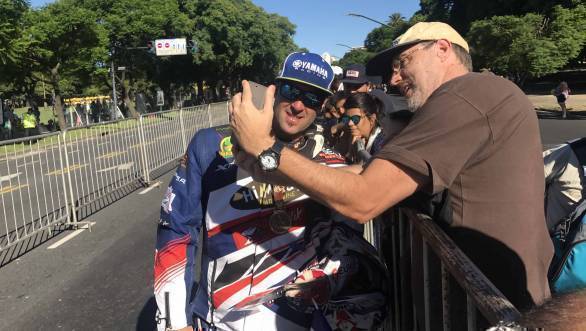 I saw TVS Racing's Adrien Metge and Juan Pedrero Garcia walk back looking elated, happy and satisfied. Winning the Dakar is the goal for both of these men. But finishing it by itself remains a towering achievement, Sometimes the idea that 99 motorcycles finished it diminishes the frame of reference so you don't see this clearly. How I wish poor Aravind KP was walking back with them as well. 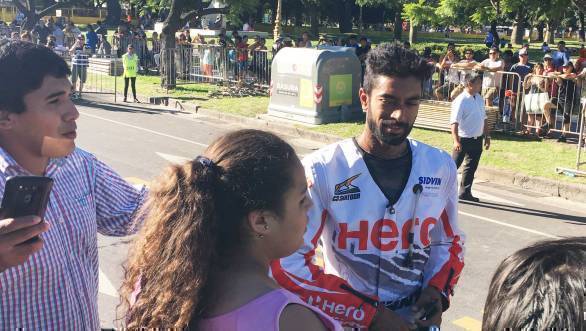 Hero MotoSport's CS Santosh stopped to say hello as he walked back to the podium after parking his enormous Speedbrain-Hero Dakar behemoth. He almost glowed from the inside in the bright sun. On his face you could see all the hard work - a full year or more's worth - that went into ensuring he finished his second Dakar, on a new motorcycle for him without any major errors this time. 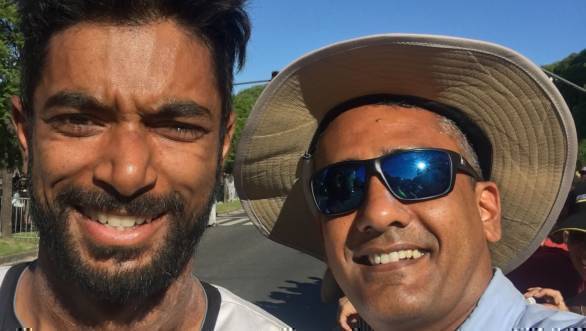 He also sauntered over to say hello to us!

I stood at the finish line until all the vehicles were parked. And I stood there agog and awash in a sea of feelings. Will I ever be brave enough to take on a task this kind of huge? Will I ever be strong enough to know that the best of us pick the hardest mountains to climb so that we can coast down the other side with feelings that mere men cannot. Will I ever know what it feels like to be a God?