It felt like the end of the world. It might sound a little dramatic, but I really and truly was beginning to wonder at that point whether the whole planet was going to implode, or explode, or whatever it is that is meant to happen when it all goes kaboom. 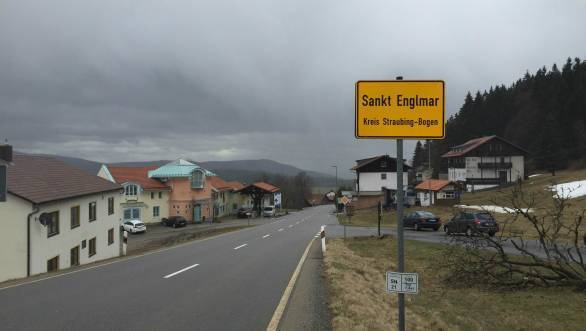 The route to Sankt Englmar was perilous and strewn with obstacles, but the journey was well worth it. Metaphorically and otherwise.

You see, we'd set out in the wee hours of the morning, while it was still dark, heading from Berlin to Bavaria. My bleary eyes registered the six-hour driving time that the navigation indicated. And with each passing kilometre, even with a fairly engaging conversation to help keep my mind occupied, there was growing within me this feeling of great dread. It was in part due to the fact that I was wondering whether real life could allow for such things to happen - ring Walter Rohrl, ask whether you could visit him at his house in Bavaria, agree upon a date to do so, and then begin driving there on the appointed date. A part of it also was caused by the strange change in weather that went from a fairly normal sunrise, to torrential rain that then turned to snow. As we drove, trees were uprooted, branches came crashing down, and overall I began to wonder if the Universe was trying to tell me that I was trespassing through restricted territory. I began to wonder if I'd make it all the way to Sankt Englmar only to be denied entry into that burg, because mere mortals like myself weren't permitted to lay our unworthy feet upon its glorious soil. In an alternate scenario, I'd be allowed all the way to Walter Rohrl's house, ringing the bell, only to find the door answered by a portly gentleman, who bore the same name, but wasn't a double World Rally Champion. And not wanting to be rude, I'd have to record an interview with this other Mr Rohrl about the complicated process that it was to manufacture weisswurst, that famous Bavarian speciality.

Fortunately for me though, these morbid fantasies remained just that. By the time the six hours had passed and we got to the Sankt Englmar signboard, the weather had cleared up just a little, and nothing and nobody stopped us from entering the little town nestled in the mountains. And when we rang the doorbell at the Rohrl household we discovered that we were indeed at the right place, about to interview the right person, and that all was right with the world after all.

But this feeling of doom that I experienced in this case is something that I have experienced at other junctures of life. Whenever something terribly significant is about to happen, I have this dreadful fear that, well, it won't. And I remember having this feeling when as an eighteen-year old I made it to the OVERDRIVE office to begin an internship with the magazine that I had grown up reading. Ah, I was a big fan of OVERDRIVE, and certainly a bigger fan of Grand Prix, the all-motorsport magazine that the same team put together. Which of course meant that the very thought of interning with them was purely outrageous and positively preposterous all at once. I was convinced that when I walked up to the reception there'd be a cold, scary sort of personage waiting to tell me that they had no record of anyone ever having applied for an internship, and I was free to exit stage left. Suitably haunting music would play in the background that would match the visuals of a young body's dreams crumpling.

Well, fortunately for me even in that case, now almost ten years ago, my fears were unfounded and a near-perfect internship awaited me. Graduating from college, magazine-hopping, and some life lessons later, I was back at OVERDRIVE. And as I type this, my fingers are all tingly, and it's not only because I managed to get them rather badly jammed in the sliding door of a van quite recently. On the one hand I was recently reminded that I completed two long years at this magazine approximately five days ago. On the other hand, what I am typing is for the 200th issue of the magazine, and being part of this milestone makes me feel all warm on the inside. In a sense, it's something of a dream come true.

Which brings me to my point. We all dream, don't we? I don't mean just what happens when the Sandman throws a fistful of the powdery stuff into your eyes. I mean those thoughts and wishes that we all have, buried deep inside us. Whether it's the desire that burns within us that every time we head out onto the racetrack, we shave a tenth off our own best time. Whether it's that one single overtaking move we know we need to pull off in order to sleep better that night. Or whether it's that secret hope we nurse within ourselves that we'll someday be spraying champagne upon our cheering team, having just won Rallye Monte Carlo. Yes, even if we choose not to call them dreams, we all dream.

And in the short time that I have spent covering motorsport, I've seen some interesting things. I have watched a young lad go from racing Lunas at the MMRT, to being the first Indian to ride in MotoGP, I've seen a braces-wearing karter from Chennai make it to the top step of the podium at the 24 Hours of Nurburgring, I've seen a boy who once spent hours bicycling up and down little heaps of sand actually finish the Dakar Rally, and I've seen a sixteen-year old talk about racing with such wisdom, acquired from the years he spent karting, it made him sound sixty. But most of all I think I've seen very many dreams come true.

And it's made me realise just how important it is to dream. It's like this - if you want to drive a clean line, even if you aren't at the racetrack yet, you need to be able to visualise the inside of a corner, and go at it with focus. And you need to ignore the outside of the corner - that horrible force that tries so hard to pull you away from your goals. And if you want to get to the top step of the podium, you need to be able to visualise yourself standing on that top step too. And that's what dreaming really is - just a little visualisation. And it is this visualisation that is one of the most vital things in life.

Happy 200th, Team OD. Many years ago someone dreamed that this would happen.

An afternoon with Walter Röhrl
Vaishali Dinakaran | 13 May 2015