Of the millions of gods and goddesses, and I don't mean the kind that come on the FTV, but the ones that invoke spiritual feelings, Lord Krishna, the eighth avatar of Vishnu, seems to be pretty popular. His memory gets more vocal in the month of August when his birth is celebrated as Janmashtami or what we in Mumbai more popularly know as Gokulashtami. It's that time of the year when thousands of young men and sometimes women, form human pyramids to break an earthern pot that's supposed to be filled with sweetened curd. In this day and age however the contents are just symbolic and breaking the pot is largely popular as a means to earn heaps of money. It's a lovely festival full of colour and music and the boisterous exuberance of youth.

It's also become one of the more popular methods of population control in India. I am not referring to what is obviously a very dangerous exercise of building pyramids that can be in excess of 10 metre tall. It's the traveling between places where the Dahi handi is suspended that is perilous. The huge sums of money that can be earned encourages people to flit between as many venues as possible. Gangs of youngsters ride motorcycles zipping through main roads and narrow bylanes, up the wrong way, into no entry zones, in the fast lane on highways, pulling up to a stop in the middle of busy intersections waiting for the rest of the party to catch up just to reach the veritable pot of gold. Each motorcycle is stacked with at least three people on it, in some cases four and if it fits, even five. None of them have a helmet on, most are in shorts and tees soaked through and through, none wear even the most basic footwear and several of them look intoxicated, whether its religious fervor or a mixture of bhang or beer the gods alone know. All collectively are recipes for disaster. 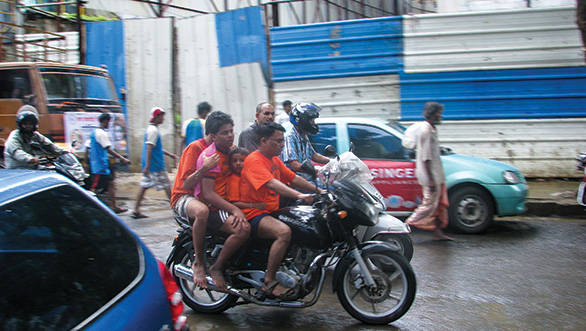 What I also fail to understand is how the authorities allow such transgressions to pass?

What I also fail to understand is how the authorities allow such transgressions to pass? On these days there isn't a spot check anywhere in the city! No one seems to give a damn about the hordes of people that flout the rules callously.

They are also a public nuisance, inconveniencing commuters on the road with their uncouth attitude and dangerous maneuvers. This sort of religious hooliganism occurs not just on Gokulashtami, there is Holi, there is Diwali, there is Ganesh Chaturthi, and scores of other festivals that seem to arouse in people this abject disregard for the rules. 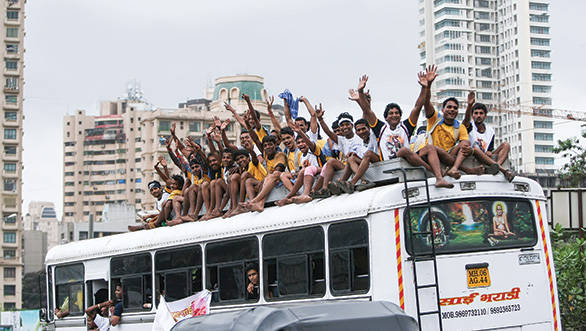 I can understand religious fervor, but is this another way to meet your maker faster than preordained

I can understand religious fervor, but is this another way to meet your maker faster than preordained? When we at OVERDRIVE ride to work or even casually to anyplace else, we make sure to have the proper kit, at the very least a good helmet and solid pair of shoes. It's the least we insist on. But seeing some of these kids riding motorcycles, and sometimes powerful ones, in bare feet and without a lid, I wonder which god they've got sitting on their shoulders?

Then there are the buses and trucks which these kids pile into by the dozens. On any given day, either of these vehicles carrying more than the specified payload are prey to the scores of traffic policemen waiting to earn a bribe. But let one festival come by and dozens of kids will perch themselves on top of the roof or the truck cab precariously, hanging on for dear life. One sharp jab on the brake pedal and the channels have the evening's breaking news! And no one lifts even a finger to curb this. Instead I see responsible citizens stand by to cheer and applaud.

Is it so difficult for us to realise that safety isn't a compromise? It's one of our god given rights. Exercise it!

Click here to get all the updates from Auto Expo 2020
Tags: Gokulashtami  |  dangerous riding  |  religion  |  too many people on the roof