Whispered wisdom from the racetrack

Epiphanies. They have a way of striking at the most unexpected of times. For me, one occurred when the steering wheel was wrenched from my hands and I felt the car finally pointing in the direction that it was meant to be going. At that point, I was a hapless passenger wondering what in heaven's name was going on, a most disconcerting feeling that I recall having experienced one other time.

It was in a Race Polo at the Madras Motor Race Track that I found myself running a little wide and getting two wheels on the grass on exiting the last corner. I'd been given strict instructions on what not to do should such a situation arise. So, of course, I did exactly that. I slammed on the brakes, caused the car to fishtail on the main straight, and spun around, coming to rest in front of the stewards' tower. I can't remember what annoyed me more at that point. The fact that I had ruined my own qualifying lap, or the fact that I had ruined the qualifying laps of the people who were coming up to the main straight after me. In retrospect, I believe it was more that I hadn't managed to perform this embarrassing feat at a remote corner of the track where it would go unnoticed. I'd instead done this right in the middle of the start-finish straight in full view of stewards, racers, guests, and pretty much everyone else. What's more, they could see the number on my racecar and for the rest of the weekend would be able to point and laugh, something that to be honest, they were entirely entitled to. 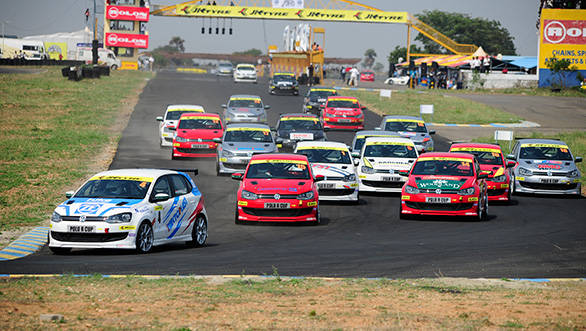 Other than realising that embarrassing things, more often than not, happen in full view of people, the more significant epiphany was that many things in life rely entirely on the power of suggestion. And that self doubt is perhaps one's greatest enemy. The minute you let the thought cross your mind that you're going to make a mistake, that you're going to slip up, you distract yourself from your goal. Your attention flickers, even if it's only for a second. And then you're cooked. You're giving up control and allowing yourself to be a passenger, and that's hardly the way that one can get better, not just as a racing driver, but at absolutely anything that you want to master.

Where does this self doubt come from, though? Oh, of course it comes from a place deep within our subconscious. But who on earth put it there? It's something that I believe I am beginning to understand when in the garage of a Formula 4 team at Oschersleben. I'm watching a young racer who is having a hard time adapting to cars after years karting. In a few days of practice he's managed to go faster and faster and faster still. But then he's hit a ceiling. He's gotten to a pace where he is comfortable, but he's seemingly afraid to push any more. He blames the behaviour of the car on various mechanical factors. Some members of the team say that the car is only behaving the way it is because he isn't pushing as much as he should. The team members responsible for getting him up to speed seem to play good cop and bad cop. One says that it's okay, that he'll take a little while to acclimatise to the new car, and that the fact that he isn't going faster is their responsibility. They need to teach him how to go faster. They need him to go out on track, push as much as he can, gather as much data as possible, then sit down and analyse this data until he gets better. The other says, repeatedly, "If I can do it, he can do it." "If I can take the chicane flat out, he can too." "If I could win in my first season of Formula cars, so can he." In some cases this might make a driver more competitive. It might make him strive so hard that he manages to win races, shatter lap records and take title after title. Or

It plants in his mind this tiny little idea that he isn't good enough. That he cannot do it after all. That he had the pace to carry himself to a certain level, but no further. That he can make it to Formula 1, but he cannot win. And the minute he thinks this, he starts believing this. And things all unravel from there.
Years ago I remember reading something Eddie Irvine had said when he was Michael Schumacher's team-mate at Ferrari. He'd said that every time he went out on track and came back satisfied at having done a good lap, he'd look at Michael's times and wonder how he could compete with him. Eventually he started believing that the only way to survive in the same team as Schumacher was to accept that he quite simply couldn't compete with him. And maybe that's why Irvine's career turned out the way it did. Because the one person who ought to have believed, more than anyone else, that he could do it, didn't.
I also remember reading Jenson Button's autobiography, a book he'd released after one single year in Formula 1, something that several people thought was a little premature. But there were a few bits in the terribly named My Life on the Formula 1 Rollercoaster that stuck with me. He'd said back then that while other racers might have been afraid of Michael Schumacher, he wasn't. And that he knew that he'd be world champion someday. It sounded like a lot coming from someone who'd only done one season in F1. But in 2009 Button was world champion. Even if people had sniggered when he'd first made such a claim, he'd done it. Some, given the state of flux Formula 1 was in in 2009, said that he was lucky.

But what is luck, anyway? Here's more whispered wisdom I acquired from the racetrack. Luck, a wise racing driver once told me, is merely the meeting of preparation and opportunity. And while you cannot rely on this ethereal, mystical force to swoop in at the right time and fix problems for you, you can be prepared for every eventuality, and keep your eyes peeled for every opportunity. Even if you don't believe that you are the best, you need to believe that you can beat the best. And then, just when you think that you've overcooked things and are going to go off into the gravel, you'll be able to catch it, and safely steer back on track. The world will think it's luck. But you? You'll know better.