Optare working on EV buses with a range of 320kms

English bus manufacturer Optare has announced that they are well afoot with their project to increase the range of their MetroCity and Solo EVs to 320kms. The company is a subsidiary of the Ashok Leyland group. Optare claims that the buses will have the extended range without any gain in net weight or decrease in passenger space. 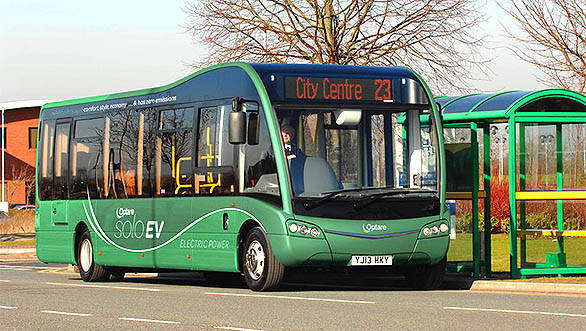 Company officials state that a key factor in extending the range of these electric buses is based on how on-bus heating is managed. They aim to engineer things effectively and use all energy in the best way possible. Optare engineers believe that pre-heating the bus on its overnight charge and adding insulation are among the viable solutions to get the desired results.

As of now Optare is working on the project themselves and a collaboration with Ashok Leyland will take place in the projects second phase.Work on doubling the range of the six in-service Solo EVs and a demonstrator has already begun at the company plant at Sherbun-in-Elmet in England. The conversions are cited to be completed before June 2016.

A balance between the passenger capacity, weight of the vehicle and cost to operator is what Optare is after. As Optare, engineering director, Alastair Munro said, "Almost anything is possible with an electric bus, but we have to be realistic. We could fit very high-performance batteries, but they would significantly increase the purchase price of the bus. It's a balancing act between weight, passenger capacity  and how much the operator is prepared to spend."

Munro further confirmed that the company plans to launch an electric double-decker by the end of 2016. The double-decker will be called MetroDecker and it will retain its diesel versions gross vehicle weight of 18,000kg.