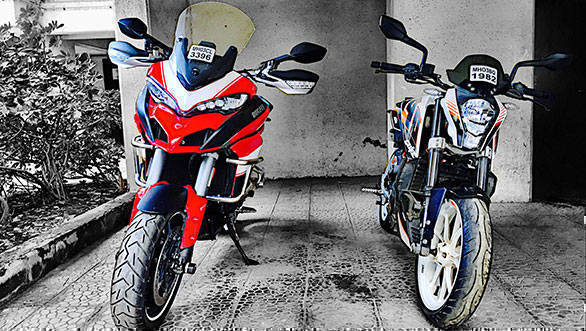 But that's simplistic. The last time around was in 2000-2001. I was young, had no money, and because I was alone handling all motorcycle testing, so not much time either. Not a good combination.

The RDs did well before 2000, back in Delhi. The weather was friendlier and Fera and Ferocia were my motorcycle universe. They got ridden daily and hard, and bikes that run every day tend not to decay or break, in my experience.

Mumbai was hard on them. The ancient chrome had no answer to the salt air, I didn't have covered parking... it was a mess. The Honda CB750 was a bad decision at a terrible time. The personal loan left me unable to eat dinner twice a week and for all its smoothness and comfort  Arti missed the gigantic Honda for years and years afterwards  it wasn't my kind of machine. It suffered the same fate too.

The silver lining is that I did get more than a few good rides on all three before I sold Ferox, the Honda, more or less gave my beloved Fera to a friend and sold the other to a bike modifier-type who hacked lovely Ferocia into a drag bike.

I was heartbroken when they left. It literally ended in tears. There are still days when the memories of the sunset days for Fera et al return to haunt me.

Seems I've learnt nothing, yes? Ferocitas the KTM, Feroci the Ducati and Feraci the Yamaha. Sigh.

But the situation is different.

I do have a little money and more importantly, I've hardly any expenses  touchwood  which should mean a pension plan at my age. But it means Feroci can burn through fuel and tyres, Feraci is on its way to a full showroom-spec restore and ditto Ferocitas. I've a team that helps me with testing bikes and I've covered parking as well.

Of these, the Yamaha is distant. It was acquired to be my track bike and it remains in street form because if I or Dodo, the co-owner, decide to take it for a spin, it would be ready to go at a day's notice. I see the Yamaha 7-8 times a year and it looks like it's settling into a not very expensive, not very troublesome pattern. That Indimotard graciously stores and services the Yamaha for Dodo and me, makes it all that much easier.

But I've a new dilemma. And that's between the KTM and the Ducati. A journalist friend commented recently, "Shumi,

Now. The Ducati's added 7,500km in four and a half months and that includes about a month off the road after my crash. The KTM, a 2014 model, now has about 17,000km on it and I've just sent it in for a refresh and some upgrades  suspension, brakes, paint and most likely tyres.

But I've put maybe 500km on the KTM since February and it's gnawing at me from the inside. Am I ignoring the KTM? Or am I just l being paranoid about being unfair?

The KTM has been flawless. It's never given a single issue since I got it. And it's hardly been ridden gently at all. I decided after the RDs that if I loved a bike that much, I'd never sell it. I'd just take it off the road and park it in my house as a keepsake. As something to wake up to.

And I worry that the Ducati's visceral appeal is separating me from the KTM's simpler but vital energy. Or it could be just a phase while I settle into a groove with the Ducati. What if I discover one day that I no longer want the KTM? It horrifies me.

There's also the more practical considerations. This is three insurance premiums a year. Roughly four services annually. At least two sets of tyres, none of them cheap, per year. This is expensive! And I do want that dirt bike/adv tourer too!

There's also the time consideration - I still do have to ride, test and shoot all the classy new motorcycles headed India-ward.

Okay, deep breath. There are no easy answers to these questions. Because when I see the multi-bike garages of my affluent friends, I dream of having many, many more bikes. And I promise myself that I'll ride them more than these people get to.

But I do know one thing. When I walk past my garage on the way back from the shops. Or a swim. Or, well, every reason I can think of, I see Ferocitas and Feroci gleaming with promise and hope in my garage. And I see the gaps which other motorcycles would fill.

And for those moments, the guilt of not sparing equal attention on all the bikes fades. The cross of their expenses seems to get lighter. And the world is full of promise and hope. It's powerful enough to make me change the opening line of this column. I own just three motorcycles right now.