Rally Finland will begin with a race-off between Ogier, Latvala and Finnish rally icons

After its success at Rally Poland, the Volkswagen Polo R WRC is all set for some legends-vs-contemporary rally stars action at the start of the Rally Finland, on July 26, 2014. It will be driven by none other than Finnish icon Markku Alén, who, along with Tommi Mäkinen, Marcus Grönholm and Juha Kankkunen, will be taking on Volkswagen drivers Sébastien Ogier and Jari-Matti Latvala.

Volkswagen driver, Jari-Matti Latvala and legend Markku Alén, who will be driving the Polo R WRC for the Helsinki battle

The spectacle  has been arranged to celebrate 20 years of association between Rally Finland and its title sponsors Neste Oil. The venue for 'Neste Oil Rally Helsinki Battle' is the 1.65 km sprint circuit situated on the waterfront in the district of Hietalahti, in the Finnish capital. Some 20'000 spectators, who are expected to flock to the grandstands, will be witnessing the legends negotiate the demanding corners and cobblestones, along with the jumps created specifically for the event, a spectacular 360-degree turnabout and a whole lot of other challenges the stages throw at them. What's more, the admission to the event is completely free.

"We are really looking forward to the Helsinki Battle. Staging a spectacular event in such a great city is a fantastic way of promoting the Rally Finland," said Volkswagen Motorsport director, Jost Capito. "How often have rally fans wondered how true rally legends like Markku Alén, Juha Kankkunen and Co. would get on in today's World Rally cars? This fascinating question will be answered in Helsinki, and our two Volkswagen works drivers cannot wait for the race-off between the stars of today and the legends. Anyone who has the opportunity to watch this spectacular battle in Helsinki should do their utmost to be there. In few places do you get a chance like this to get so close to drivers past and present, and the World Rally cars." 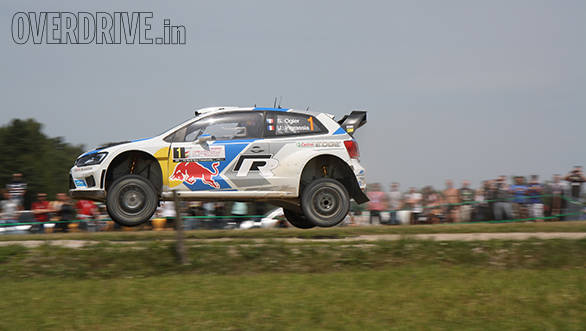 Other rally drivers joining in the action will be Mads Østberg (Citroën), Mikko Hirvonen (M-Sport Ford), Thierry Neuville and Juho Hänninen (both Hyundai). The best of the present-day drivers and the top rally legends will be slotted to qualify for the final."It will be great to race against the all-stars of the rallying scene," said Jari-Matti Latvala. "I am sure we will put on a great show for the fans. There can be few better ways to warm up for the Rally Finland."