Renault has launched the Captur SUV in India at Rs 9.99 lakh,pan-India. This is an introductory pricing. The Renault Captur is based on the Duster's platform and will be sold in three trims for the petrol and diesel variants each - RxE, RxL and RxT, with the Platine being exclusive to the diesel. The Renault Captur measures 18mm longer than the Duster and will be offered in a 5-seater configuration, much like the Renault Duster. There will be personalisation programmes for the Renault Captur - Diamond Deck and Urban Connect, both which bring in graphics and adornments at different stages.  Renault is offering the Captur with a petrol as well as diesel engine from the onset. The Renault Captur gets full LED headlamps with DRLs for the top Platine trim. The interior gets a choice between two-tone look or an all-black theme like the Russian model. A 7.0-inch touchscreen infotainment system with Bluetooth connectivity and navigation is on offer too. The rear bench can be folded down in 60:40 ratio, which will expand the 387-litre boot to 1,200 litres. At 204mm of ground clearance, the Captur will have no problem maneuvering over bad sections. The design of the Renault Captur will be one of its strongest highlights. 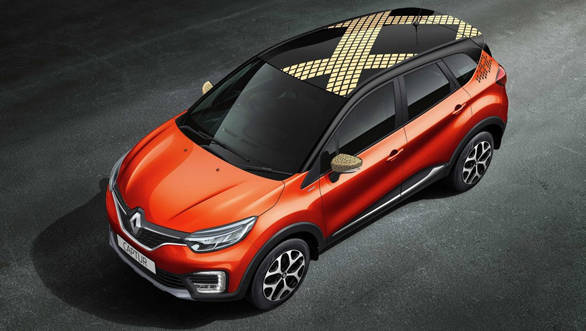 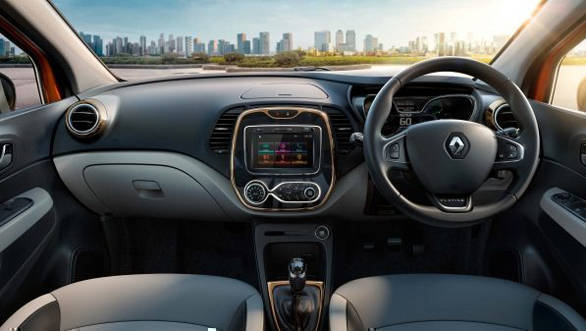 There will be a choice of the familiar 110PS/240Nm 1.5-litre turbo-diesel and the 105PS 1.5-litre petrol engine. Both the engines will be mated to a 6-and 5-speed manual transmissions respectively. An AMT may be likely at a later stage.