French automaker Renault has teased its Renault Symbioz autonomous EV concept through a short video, a week before the concept is revealed at the Frankfurt Motor Show 2017 in Germany. The Renault Symbioz EV concept represents Renault's vision of autonomous, electric and connected mobility in the future. With this concept, Renault will showcase what it sees as the car for 2030. Renault had previously shown its Renault Trezor concept at the 2016 Paris Motor Show. The Renault Symbioz EV concept's name seems taken from the word symbiosis, which means interdependent existence, and also indicates that the concept car will have connected mobility as a theme. 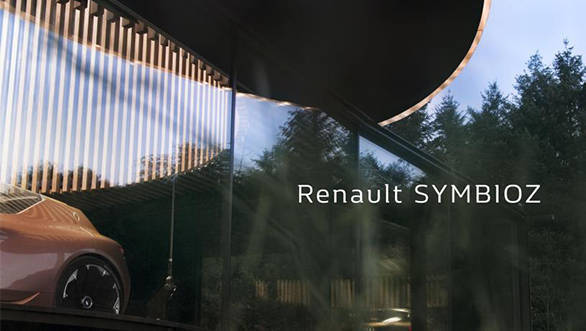 The teaser shows a rear three-quarters view of the Renault Symbioz EV concept. From the teaser, we can gauge that the Symbioz EV will be a three-door car, with what appears to be a glass canopy roof. If the latter part is true, then the Renault Symbioz could also have an interesting door opening mechanism. The rear also features elongated LED taillamps. With the Renault Symbioz EV, the French company intends to showcase its efforts towards autonomous electric vehicle technology. Most major manufacturers are currently developing their autonomous mobility systems. The Renault Symbioz will be revealed by Thierry Bollore, chief competitive officer, Groupe Renault, and Laurens van den Acker, senior VP of its corporate design.