First there was the Captur, and now there's going to be a Kaptur crossover, similar in design and style, to its smaller sibling. Renault has teased images of this very crossover, which is slated to make it to India in the future, although it won't be badged the Kaptur in the country. The rebadged Kaptur crossover will be positioned above the Renault Duster.

What we know about the Kaptur crossover is that it has a longer wheelbase when compared to the Captur that is currently sold in the European market, and is expected to exceed 4.4 metres. This means it's going to be longer than the Duster, which measures 4.3 metres. The fact that the Kaptur crossover is as long as it appears to be indicates that it will have space for a third row of seats, and is hence likely to be a seven-seater. 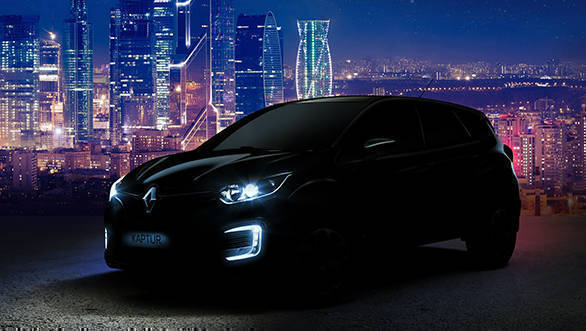 While the Kaptur is based on the Duster, the design on the outside and on the inside is going to be based on the Captur. It's likely to be a more premium version of the smaller car, which might also mean the price tag will be affected. The new car is expected to use the underpinnings of the Renault-Dacia M-Zero platform, that is longer and has been used for models like the Lodgy.

The engine that's expected to power the Kaptur is a 1.5-litre diesel, that will be mated to either a 5-speed or 6-speed manual 'box, or perhaps a 6-speed Easy-R AMT. Also expect an all wheel drive version of the car.

While we can't predict exactly when this crossover will make it down to India, it should be soon after the Kaptur goes on sale in Brazil, which is the market it is being designed for.