A tiny red buggy flanked by chequered flags  the logo for Baja SAE India, which has persisted since its inception in 2007, effectively conveys what the event is all about  an all-terrain, single-seater four-wheeled vehicle, designed, fabricated and raced by teams from different engineering colleges. And yet there is so much more that this little pictorial representation fails to convey.

For instance, the fact the despite all the violent brushing off and patting, there is still a thin film of dust that has encompassed everyone present at the NATRAX racetrack in Pithampur (Indore, Madhya Pradesh)  from the organisers and auto journalists to all members from different teams deployed at different points of the track, their eyes watching out for their respective vehicles to pass by and their hopes pinned on their driver. But they're not budging from their positions on the service road. They're alert and ready to attend to that car they've spent one year's worth of blood and sweat (and precious college and sponsor funds too), in the very possible event that it breaks down, or worse, falls apart. 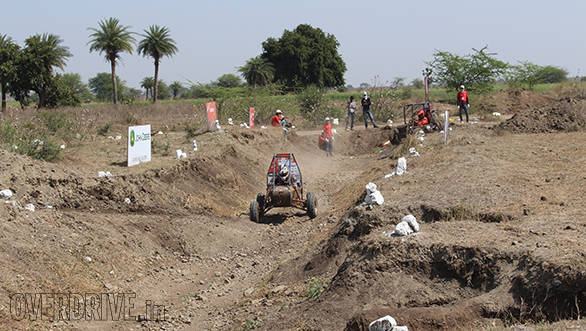 Because the track at Pithampur had not been designed to just test the best and the fastest  as the commentator at the racetrack constantly reminded us, the track had been built to see how many contenders last through the four-hour endurance race on Sunday, February 23, 2015. The night before the event, Dr KC Vora, deputy director and head of ARAI academy, who has been responsible for Baja since its inception in India, explained in detail how much the track had been changed this year.

So while 325 teams entered the competition, only 110 made it the week-long evaluation  held in Pithampur. The cars then competed in the static challenges and were judged on parameters like build quality, engineering design, cost and safety. These rounds served as elimination processes leading up to some 60-odd teams qualifying for the final endurance race. And, according to Dr Vora's estimate, about 40 of them wouldn't finish the race  not because of lack of merit but because the track was just that much tougher this year. 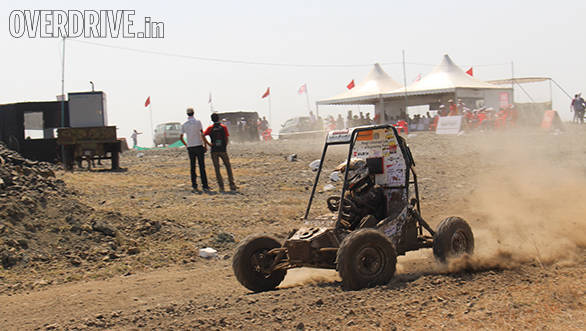 The site used to be a 3.25km dirt track filled with convoluted loops, hill slopes and tight turns that sent the drivers spinning along the course, dust flying everywhere. The new track for 2015, however, was built to conform a little more closely to the international off-roading events from which the Baja SAE has originated. Spanning a length of 4.6km, the terrain comprised of more straights, but not without its share of booby traps. A muddy slush called the Gich Bridge tested the true mettle of the traction in the cars while the Kalapani was incidentally a dark but dry soil patch that swallowed the little buggies, testing the true mettle of the drivers as they tried to get out of the ditch. Wet came into the picture at the Splash-e-dash which was a water-filled trench covered by a sheet of tarpaulin  it turned out to be mostly bad news for the exhausts of the cars. And there was a stretch actually named The Booby Trap  rows and rows of nearly two-feet high bumps that were meant to rattle suspensions and steering. 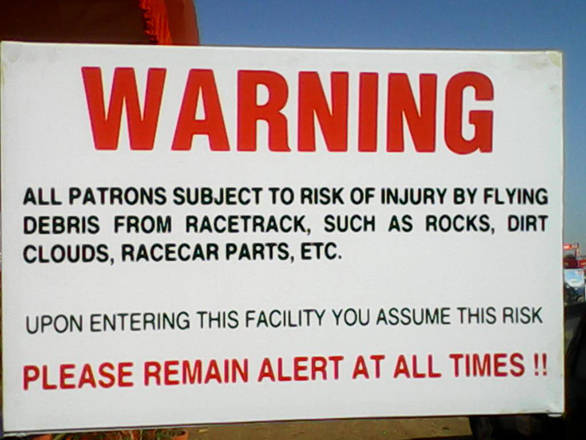 Ominous signs at the NATRAX facility, where the Baja SAE is held, tell of what to expect when the race is in progress

And it wasn't too long after the flag-off that The Booby Trap claimed its first victims. Right on first lap, Car No.43 and Car No.47 found themselves entangled (yes, you read that right), causing Car No.47 to be towed away to the bay. Meanwhile, Team Nemesis (Car No.2) from College of Engineering, Pune (COEP), who had started at pole position owing to their lead in the Virtual Baja round before, finished the first lap by a massive margin, way ahead of close contenders Car No.52 (Team Stallions from Nirma Institute, Ahmedabad) and Car No. 15 (Alard College, Pune). COEP's Baja pedigree was evident right from the start  they've been making podium finishes in this very race, each time over the last four years. And even though the track was new, their driver's experience of three years, on this terrain, showed. While other cars bravely but cautiously climbed through the steep rock-riddled slopes, Suraj Aru actually managed to overtake in those stretches. Same with teams like Nirma Institute and SRM College, Chennai, whose cars were making their way through the rocks like mountain-goats, with confidence in their machines and skill.

The top three positions continued to shuffle  and after the first pitstop, the runner-up, Car No.29 from Team Predators, DY Patil College, Pune was closing in on Team Nemesis' lead. But not for long  and this is why it was no surprise when, after the four hours, Car No.2 was announced as the winner of the endurance round. On being asked about the secret of their success at Baja, the winners from COEP sited their focus on maintaining the weight of the vehicle along with checking the reliability of their systems as the factors that lead to their win. While the cars around weighed anything between 200 to 220kg,  COEP had managed to shave off a good 50kg off their car to bring it down to an impressive 160kg. 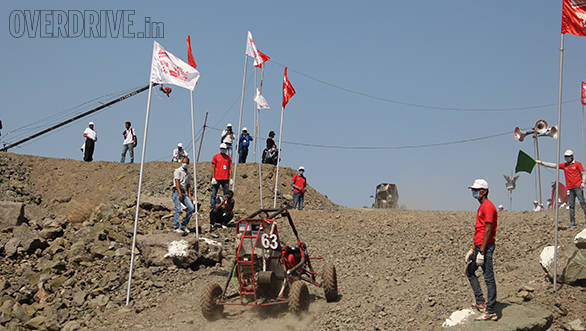 Apart for this final endurance round, the Baja SAE also evaluates the cars on a host of different parameters and awards two winners in each category. The static events, which were held earlier this week, saw Rustomjee College from Gwalior win the first prize for Engineering Design while Sinhgad College of Engineering, Pune bagged the award for Cost. Even in the static rounds, team COEP picked up awards for Computer Aided Engineering, Build Quality and Safety, just to name a few and turned out to be the overall champions for the 2015 Baja SAE.

Presiding over the final veneration ceremony was Chief Secretary, Madhya Pradesh, Anthony J.C. de Sa along with Dr Pawan Goenka, executive director and president, Automotive and Farm Equipment Sectors, Mahindra. Dr Goenka, commenting on the new endurance track, said, "What we saw today is only the first step. Why should our event be any lesser than anything internationally organised? We are proud, even satisfied and we have to continue to be best in the world, which means we will have to focus a lot on the design of these vehicles. Next year, instead of 58 vehicles qualifying for the final round, we'd like a 100 per cent of them making it." 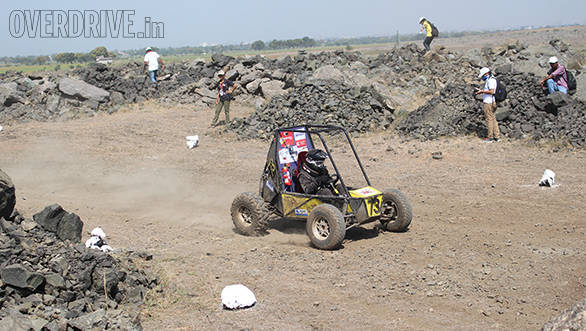 Earlier reports from last year suggested that the Baja SAE would also become an international event by 2015, inviting participants from other countries to these grounds for the off-road car building and racing competition. In fact, even the theme for this year, Beyond Boundaries, brought our hopes up. However, the plans did not seem to come through as only domestic teams were seen competing this year. But the level of difficulty and the willingness of the contenders to meet the challenge were enough to do justice to the theme.

It was no surprise when, after the four hours, Car No.2 from COEP was announced as the winner of the endurance round

Apart from the new-spec track, this year, SAE ( Society of Automobile Engineers), under the aegis of NATRIP (National Automotive Testing and R&D Infrastructure Project), also held the first ever electric car building and racing event, the e-Baja, for which a total of eight teams signed up, six made it to the final round and four completed the race. The top spot in the e-Baja was bagged by UV Patel College of Engineering, Gujarat. All the contenders in this category were cars powered by a Mahindra Reva-built electric train and the green livery on the cars and the team t-shirts quietly conveyed the environmentally conscious intentions of this new category. 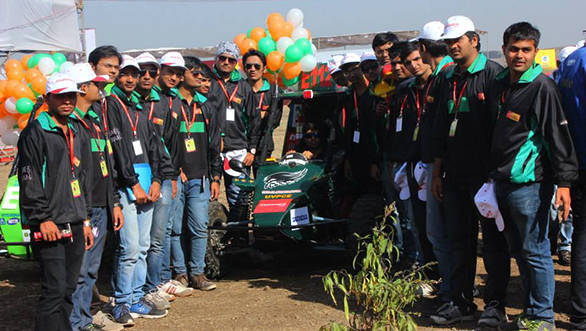 The green theme of the E-Baja clearly gave away the eco-friendly intentions of the electric vehicle building competition that was held for the first time this year. Image courtesy: Baja SAE India

Meanwhile, the fuel-powered Baja cars back in the sheds had no livery or badging to show  all of it covered under layers and layers of dust and grime, only a flag sticking out to show the car numbers. But the jubilant faces of not just the winners but all those who completed the track without a break down and even those who suffered breakdowns, fixed the niggles and put the vehicle back on the track  no dust or grime in the world could hide that. Of course, certain machines stood out for the interesting innovation that was employed in them, case in point, Car No.52 from Team Stallions, Nirma Institute that had an exhaust which sounded just right.

So coming back to the logo we discussed at the beginning  to these contenders it means more than just a red buggy bobbing up and down that unforgiving Pithampur track. It signifies the highs and lows of clearing or not clearing the virtual rounds, the technical inspections and what have you and even the opportunity to be considered part of a talent pool (a lot of contestants get picked up by the Mahindra HR for placement in the company after graduating). But what does that red buggy mean for us, on the sidelines, watching these cars pass by us  they're not whizzing past but still, steadily climbing those trying slopes and rocks. Well, it just means that we're possibly looking at the men and women who're bound to contribute to the automotive future. And if this is the enthusiasm and intensity they carry forward into their professional lives  then, we might just be in for a rather bright one.