Nissan Motor India chose six gamers last month to represent India at the GT Academy International Race Camp in Silverstone. The camp was aimed at preparing the finalists for Nissan's motorsport activities and choosing one winner out of the participating nations. The NISMO athlete, as the GT Academy winner is called, wins a million-dollar contract to race for Nissan at one or more of the many racing championships that the Japanese carmaker participates in every year.

This year however, Nissan introduced five new regions to the GT Academy  India, Mexico, Australia, Thailand and Western Asia. 27 participants travelled to Silverstone - all brand new faces. So every team was allocated an experienced driver to mentor them through the race camp. Mentoring India was Karun Chandok. Out of the six participants from India, Akshay Gupta opted out due to some unforeseen circumstances.

The race camp spread over six days comprising of fitness and endurance tests . On day one it was a challenge involving traffic, followed by overtaking and focus challenges for day two; gymkhana and stock car racing were slotted for day three; open-wheel racing and off-roading challenges for day four; a buggy race and a one-on-one team-mate race for day five. The final day saw a circuit race between the finalists.

The fitness tests proved tough on Team India, who finished last on the challenge. The overtaking challenge wasn't very fruitful for them either. For the focus challenge though, which needed the participants to evade laser using a steering wheel as an obstruction, India put up a tough fight against Australia as the latter won. The gymkhana challenge brought out some precise driving from the team, but other teams proved to be better on the day. With players from each team being eliminated at the end of every day, day four had only Prakash Niar and Abhinay Bikkani taking up the challenges. The buggy race saw India secure the fourth place out of five, which also gave them P4 on the grid for the final race.

However, since only one could advance to the final race, Prakash and Abhinay had to face each other in a one-on-one trial race. The race took place on Silverstone's Stowe circuit with a NISMO 370Z as a weapon of choice. Though undisclosed to the media, the timings were said to be very close with Abhinay Bikkani edging ahead of Prakash. 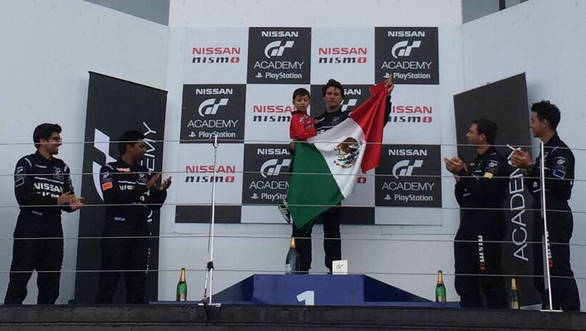 Day six was the big one. Winning the circuit race was important but not the utmost priority. The judges were to choose the winner of the GT Academy on the basis of the player's performance in the race, along with his overall progression in the race camp challenges. Abhinay started the race with one of the fastest practice times under his belt for the day. However, an error by the Malaysian driver, Thanroj Tanasitnitikate, dented Abhinay's confidence and his car in the first lap of the race itself and sent him to the last spot. Abhinay worked his way up the field as the race progressed to overtake the Thai and Western Asian contenders to move into third. Ahead, Mexican Ricardo Sánchez and Australian Josh Muggleton were battling it out for the top spot. The Australian drove extremely well to start from the last spot on the grid, but couldn't clinch the victory from Ricardo.

Ricardo Sánchez had impressed the judges enough throughout the camp and it did not come as a surprise when he was announced the winner of the 2014 GT Academy. He will now be trained for four months with NISMO for the Dubai 24 Hours endurance races.
Abhinay, despite his inexperience with cars as powerful as the NISMOs, showcased immense talent and a quick learning curve that one would come to expect from a racer. However, it fell short for this year. For its debut year, India seems to have performed well. But the lack of fitness and exposure to powerful cars and track time are areas that need to be addressed if India wants to do any better at next year's GT Academy. Speaking of which, here's what Abhinay has to say to future aspirants of the Nissan GT Academy: