Round 2 of the MMSC FMSCI National Motorcycle Racing Championship concludes

The second round of the MMSC FMSCI National Motorcycle Racing Championship concluded at the MMRT over the weekend and it was every bit the regular dose of highly exciting action across the classes. Day one kicked off with the lower category of the Honda One Make Championship  the CBR 150 Novice class. R Rajnikanth won the race, fending off constant attacks from second place man Vimochana Gadusu while R Harikrishnan finished in third place.

The next race of the day was the TVS MMSC One Make Championship with the RTR 180 Open category. The race saw multiple upsets with both favourites not finishing as well as they would have liked. Mathana Kumar retired while Akash Dingare finished in sixth place. The fight for the lead was a fierce one with Arvind Ganesh beating Abhishek Vasudev by 0.59 seconds. KY Ahamed finished in third place, less than half a tenth behind the leaders. 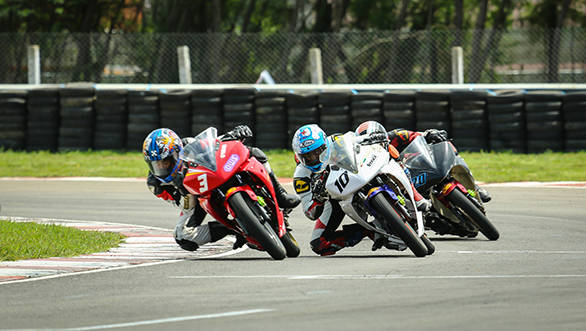 Having finished on the podium in Race 1, R Harikrishnan hopped on his bike in the Group D 165cc category and took his first win of the weekend. Prabhu V finished in second place while Naresh Babu completed the podium. The next race saw the Honda CBR 250 riders battling it out in what was one of the closest finishes in a long time. Sumit Lucas Toppo beat A Prabhu by 0.002 seconds, both riders crossing the finish line side-by-side. The result wasn't clear until Race Control confirmed that Toppo had won the race. Sarath Kumar finished in third place.

Race 5 saw the TVS One Make bikes back on track, in the Novice category. This time Naresh Babu took a comfortable win ahead of Vimochana Gadusu and Prabhu V. The final race of the day saw the Group C 165cc bikes hit the track. K Jagan took a convincing victory in the category ahead of Harry Sylvester  and Vivek Pillai.

Day 2 began with the Novice 130cc category where R Harikrishnan prevailed over K Kannan and S Kannan. Race 2 was on the 180 RTRs where Mathana Kumar took a comfortable win followed by a close battle between KY Ahamed and Arvind Ganesh in second and third respectively.

The Group C 165cc race turned out to be another cracker with India's top two riders, Sarath Kumar and K Rajini battling it out with K Jagan for the lead. In the end, Rajni managed to take the win over India's only representative in the Moto3 world championship while Jagan came in third. Next up, in the Honda CBR 150 Novice category, R Rajanikanth took his second win of the weekend after a long battle with Naresh Babu and Vimochana Gadusu, who finished in second and third respectively. 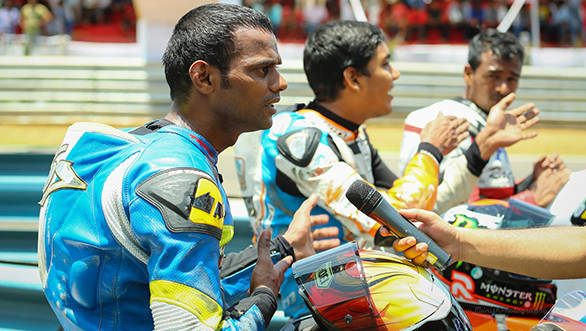 Meanwhile in the Group D 165cc category R Harikrishnan took another win while Prabhu V finished in second place ahead of Naresh Babu. In race 2 of the RTR 180 Open category, S Kannan took the win ahead of Naresh Babu and Malsawmdawnghiana. The final race of the weekend was on the Honda CBR 250s where Ramesh Kumar took a surprise win. A Prabhu came in second place with Race 1 winner Sumit Lucas Toppo finishing in third place.

It was a supremely thrilling weekend with an overwhelming number of races and fierce competition. Expect plenty more of the same when round 3 of the MMSC FMSCI National Motorcycle Racing Championship takes place on August 1 this year.