The third season of Etios Motor Racing will be held at the Buddh International Circuit, Noida from September 26- 27, 2015 with 12 new racers participating in it. 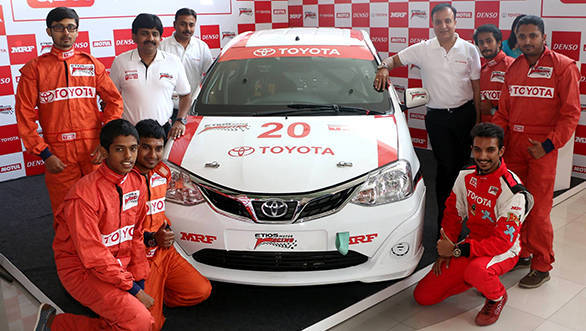 Participants from the corporate sector will also get to take part in Toyota's Corporate Go Kart Challenge this year. It will be held at several locations and one lucky winner from every location will get a chance to drive the EMR race pepped car at the Buddh International Circuit.
N Raja, directorand senior vice president, marketing & sales, Toyota Kirloskar Motor said, "The EMR Trophy is not just a platform for the young racers to venture out into the motorsport arena, but we also go the extra mile by preparing them for bigger opportunities for racing in India. The Etios Motor Racing platform is an earnest effort from Toyota for the aspiring young racers, who are keen to develop their motoring skills."
In the second season of Etios Motor Racing, Dean Mascanrenhas claimed the victory, with racers Varun V Anker and Hisham as runner-ups joining him at the podium.

"Ever since EMR's inception in 2012 and over the years, we have seen a growing number of motorsport enthusiasts across the country. Etios Motor Racing platform has successfully catered to young aspirants to further develop their motoring skills," said Rajiv Sharma, general manager- north, Toyota Kirloskar Motor.