SIAM Anti-Counterfeiting Group pledges to do away with fake parts

Now SIAM has taken a new initiative to combat the issue of counterfeit auto parts by forming an Anti-Counterfeiting Group (ACG). The objective of this group is to create awareness and educate customers about the dangers and risk involved in using fake parts for their automobile. 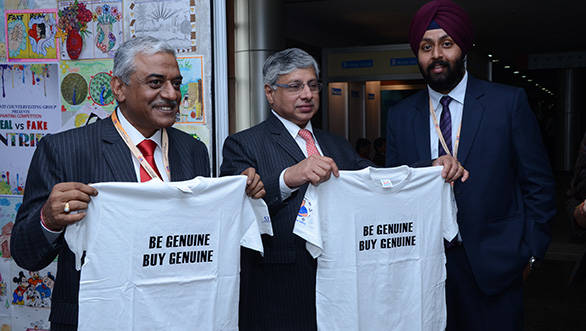 SIAM officials promoting use of genuine parts for automobiles

They kick started their expedition, by launching this initiative for the first time in the Auto Expo, held this year in the month of February. There they launched "Say it with a slogan" campaign to connect with young and tech savvy audience and to spread awareness among the visitors.

During the proceedings, they engaged the visitors via three "SIAMFightingFake" stalls at different places inside the venue. Their stalls were integrated with social media to engage visitors who were also asked to share their slogans against "Fake", the best of the slogans were rewarded. The best of paintings on "Real v/s Fake", received by the painting competition help by SIAM ACG at different schools in Mumbai and Delhi were also rewarded and displayed on the walls at their stalls.

There were three Visitors Pledge Walls each of which was placed at the entry to the VIP Lounge, at the entrance to the building near Hall 7 and at the exit of Hall 8. These were placed to motivate visitors to use genuine spare parts for their vehicle and create awareness about the risks involved in using spurious spare parts.

Mr. Rajesh Bagga, Chairman, SIAM ACG said "SIAM has bought the entire automobile industry together to fight the menace of counterfeiting parts. We will make spares available freely and distribute them deeply. It is not about the price but safety of the consumers."

Mr. R.S. Kalsi, Co Chairman, SIAM ACG said "We are not competing with the local spares market on price point, but yes, we are definitely charting out the plan to spread more awareness on the local market and dealer to use only OEM spares, because not only that's safe for the end user but that's the ethical way of doing business."

The campaign was accompanied by the dance performance event based on Anti-Counterfeiting theme. The performers displayed placards relaying the campaign message towards the end of the performance.