The Singapore Airlines (SIA) Light Up The Night Carnival is returning as a two-day event over 22-23 August 2015, in the lead-up to this year's FORMULA 1 SINGAPORE AIRLINES SINGAPORE GRAND PRIX. This year's Carnival is held in conjunction with race promoter Singapore GP's 'Rev Up Singapore!' campaign.

The Carnival is open to members of the public and will be held at the F1 Pit Building along Republic Boulevard from 1pm to 9pm. Minister (Prime Minister's Office), Second Minister for Home Affairs and Trade and Industry, Mr S Iswaran, will be the guest of honour for the first day of the event. He will be joined by Mr Lionel Yeo, Chief Executive of Singapore Tourism Board (STB), Mr Goh Choon Phong, Singapore Airlines' CEO, and Mr Teo Hock Seng, Chairman, Singapore GP Pte Ltd.

Motorsports enthusiasts can look forward to exhilarating stunt displays and try their hand at changing a Formula 1® race car tyre at Singapore GP's Pit Stop Challenge. In addition, a supercar convoy around Singapore will take place on the first day of the Carnival as part of the activities.

This year's highlights will also include the SIA Paper Plane Challenge, where visitors can watch participants compete with their paper planes in the Finals for the Greatest Distance and Fastest Plane categories. The Challenge is aimed at bringing a taste of engineering and aerodynamics in aviation to the public as part of the broader theme of innovation in Formula 1®. 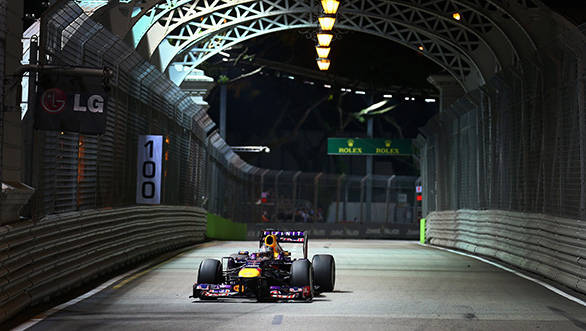 The 'Rev Up Singapore!' initiatives  part of a campaign by Singapore GP to get the local community excited for the upcoming Formula 1® night race  includes even more fan-friendly initiatives. Members of the public can experience the thrills of go-kart racing on the Marina Bay Street Circuit at a nominal fee of $5 where proceeds will go to the Community Chest, clock in their best lap time on Singapore GP simulators and participate in a Formula 1®-themed art showcase.

Another highlight will be the Fit for Racing Challenge, which will involve participants competing in specific workouts that simulate the training regime of Formula 1® drivers, held on 22 August. Registration for the challenge is free at www.revupsingapore.sg. Members of the public can try out interactive Fit For Racing stations on 23 August.

"We were very encouraged by the overwhelming response to the first-ever Singapore Airlines Light Up The Night Carnival last year. This year, we are bringing back the Carnival as a two-day event to allow more fans to enjoy exciting Formula 1®-related activities, as we gear up for the night race in September," said Singapore Airlines Divisional Vice President Sales & Marketing, Mr Foo Chai Woo.

"We are delighted to partner with Singapore Airlines for the Light Up The Night Carnival in conjunction with our Rev Up Singapore! campaign. With less than a month to the 2015 FORMULA 1® SINGAPORE AIRLINES SINGAPORE GRAND PRIX, we want to spread the excitement of Formula 1® to as many people as possible from the petrolheads to even fitness enthusiasts with the exciting offerings at the carnival," said Singapore GP Deputy Chairman, Mr Colin Syn.

SIA Formula 1® merchandise[1] including desk fans shaped like turbine jet engines, racing car earphones, polo tees and bears in pit crew overalls, will be available for purchase at the Carnival. In addition, Formula 1® fans will be able to purchase tickets for the 2015 FORMULA 1® SINGAPORE AIRLINES SINGAPORE GRAND PRIX at exclusive rates, as well as race merchandise at the Carnival.

More information about the SIA Light Up The Night Carnival is available at www.SIAnightrace.com.