In an effort to recapture the compact hatchback market, Tata has released the Tiago in India as a replacement for the Indica. The result is quite impressive, to say the least, especially with the introductory price that they have launched the car at. The Maruti Celerio when launched, was received very well, with its compact design, peppy engine, and the option for an automated manual transmission. 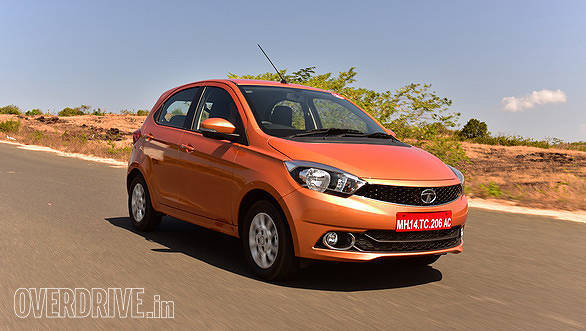 Apart from its refreshing exterior, the Tiago shines in the spec department as well. The petrol variant gets Tata's 1.2-litre Revotron engine, producing a healthy 85PS and 114Nm of torque, while the diesel is the 1.05-litre Revotorq engine, with 70PS and 140Nm of torque. Taking the Celerio into context, both its engine options trail far behind the Tiago, with the petrol producing 68PS and 90Nm of torque, and the diesel producing 48PS and 125Nm of torque. This, on paper, translates into vastly superior performance for the Tiago.
If we compare the dimensions of both hatchbacks, the Tiago is roughly 145mm longer and 47mm wider than its rival, while being only 25mm shorter. This results in more leg room and better comfort in the Tiago. The Tiago also has a larger boot at 242 litres compared to the Celerio's 235 litres. 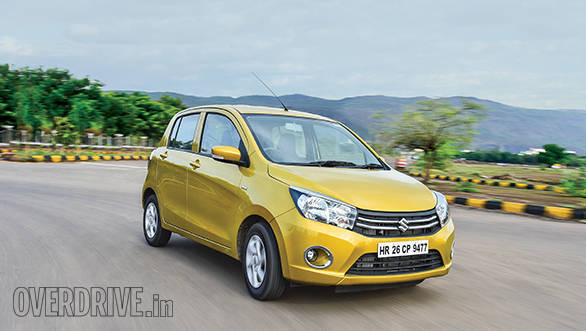 If we step into the territory of fuel economy, the Tiago's petrol variant gets a claimed 23.84kmpl compared to the Celerio's 23.1kmpl, although during the Celerio's road test, we were able to only achieve 17.7kmpl. The diesel Tiago gets a claimed 27.28kmpl, a smidge under the Celerio's 27.62kmpl. The diesel Celerio however, recorded an overall fuel economy of 21.1kmpl in the road test.
Finally, when comparing the rivals' prices, the Tiago is a whopping Rs 35,000 cheaper than the Celerio, in both the petrol and diesel options. For a definitive verdict on which one is worth your money, bookmark this page. 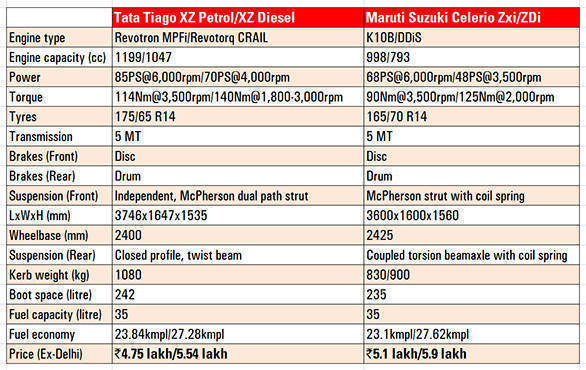