Mahindra recently launched its latest sub-4m SUV offering, the NuvoSport, a replacement to the not-so-successful Quanto. The NuvoSport has Mahindra's third generation chassis on top of which sits a body with aggressive styling, a welcome change from the Quanto a.k.a mini Xylo. The 100PS engine in the NuvoSport also produces the highest torque in this party, at 240Nm. The NuvoSport also features the longest wheelbase amongst the four at 2760mm, and surprisingly, the lowest ground clearance at 180mm. It also boasts the largest boot in this comparison, at 850 litres with the seats folded up. 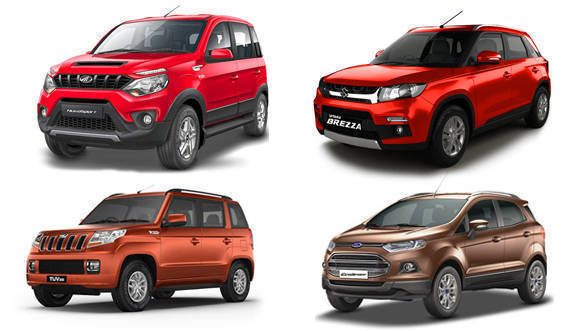 The Mahindra TUV 300 sits at an awkward position since it's below the NuvoSport in almost every aspect but lies in the same class. A few reasons why one should go for the TUV 300 over the NuvoSport is higher ground clearance at 191mm, better value (Rs 32,000 lower to be precise), and a more rugged stance.

The Ford EcoSport has been around for a while now but is also the most established. It has the highest ground clearance amongst the rivals at 201mm but it lacks seating for more than five grown-ups. Its kerb weight of 1,290kg makes it much lighter compared to the hefty Mahindra offerings, resulting in a much higher power-to-weight ratio, an important factor for better economy and performance. The top-spec EcoSport is however the costliest of the lot, at Rs 9.75 lakh (ex-showroom Delhi).

The Maruti Suzuki Vitara Brezza meanwhile shines in various aspects. Its engine produces 90PS and 200Nm of torque, the lowest amongst all the cars, but it's also the lightest, at 1,195kg. This should translate to more frugal running costs. The Brezza has the shortest wheelbase at 2,500mm. This makes the Brezza an ideal option for city dwellers for use in cut throat traffic conditions.

Take a look at the stat sheet comparing all the rivals below. 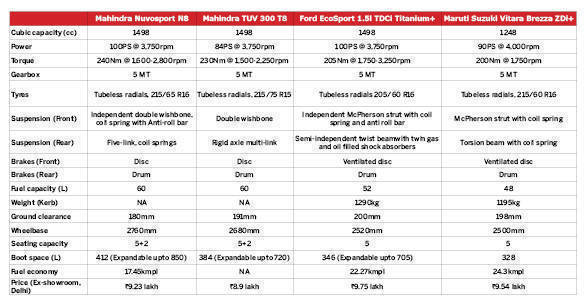