From our report on Maruti's plans for the Indian market, it was evident that the Swift facelift featured high on the list of priorities for the carmaker. The Swift was a runaway success for Maruti when it was launched in 2005 and ever since has commanded long waiting periods, especially when the diesel variant was introduced in 2008. The Swift got a facelift in 2011 and ever since has soldiered on unchanged. So it's a big deal, that after three whole years, a new Swift is on its way. 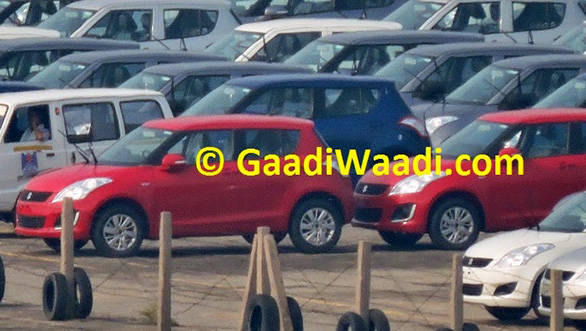 The updated Swift was recently spotted at Maruti's Manesar plant. Revisions include DRLs like in the old Hyundai i20, smart key access and rear disc brakes. The alloys also look fresh too. Inside the cabin, there will be a push button start and sporty stitching on the seats. The Swift facelift is not expected to open up more knee room for the rear passengers though. The luggage space is also expected to remain as is.

Globally, Maruti has a Sports variant for the Swift which comes with 1.6-litre engines. However, we don't expect this to be launched in the Indian market anytime soon. Now that the Ciaz has been unveiled, we expect Maruti to launch the facelifted Swift very, very soon.

Maruti Suzuki Ciaz to be launched in India by mid-October