Part of Tata's product re-boot plan is the launch of an updated Nano line for 2015. Apart from the much-awaited Nano diesel, Tata would also give their entry-level car an automated manual transmission (AMT). While test mules of this product have been spotted on multiple occasions, the Tata Nano AMT that we've caught on camera has some interesting changes. 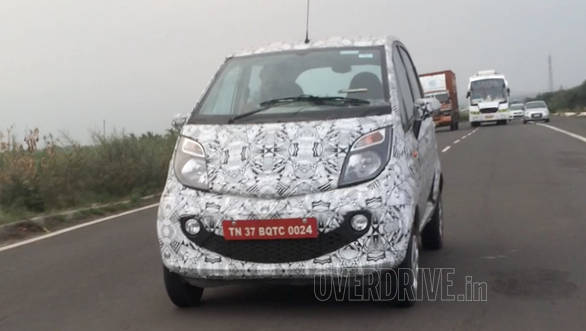 During our 2014 Auto Expo coverage, we had mentioned that the Tata Nano Twist Active concept that was displayed at the Tata exhibit showcases the updated design that the Nano diesel would wear. We followed it up with a scoop video of the Nano diesel with the updated bodywork, but the Nano AMT seen here shows what the final production body will look like. The Nano AMT mule gets the updated headlamps with chrome surrounds and a revised clear-lens treatment for the turn blinkers. The mule also has the new bumpers with the Pixel-concept inspired 'smiley' mesh and repositioned fog-lights. Both, the headlights and the fog-lights get bulbs  more powerful than those on the current model. 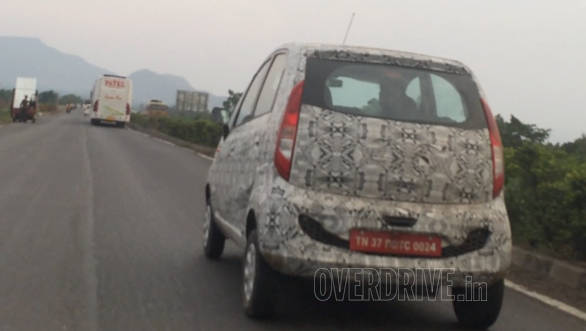 Expect the interiors to have faux-wood inserts. At the back, the fifth door handle confirms that the hatch can be opened. The rear bumper too gets the new mesh treatment. Interestingly though, the new bumper masks the entire engine unit and exhaust muffler unlike its current counterpart.

In our recent conversation with Tata, we learned that their AMT variants would start shipping this year itself. It will start with the Bolt and Zest followed by the Nano AMT seen here. Third-quarter 2014 is our bet for the launch of the 2015 Tata Nano AMT.