The 2017 Ford EcoSport has been snapped testing on the streets of Sao Paulo, Brazil. The compact SUV has been on sale in the country for quite a while and resembles the India spec EcoSport. Hence there's scope to believe that the next update to the EcoSport in our country will closely resemble the vehicle you see in these images. 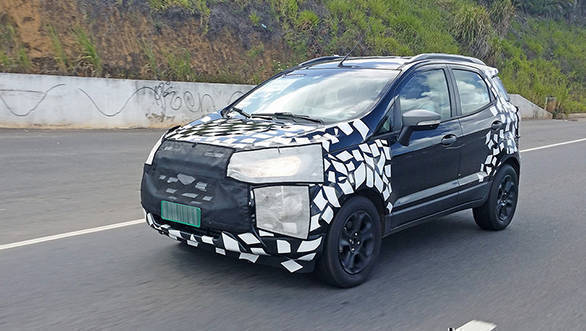 The camouflage wrap hides the front end but from what's visible we feel the EcoSport may get a revised headlamp elements and new fog lamps. There may be revisions to the grille too. The overall silhouette, however, remains the same. Also, unlike the updates to the European EcoSport, where the tailgate mounted spare wheel has been ditched, the Brazilian EcoSport continues with the original set up. Expect the upcoming update to the Indian EcoSport to continue with the spare wheel at the tailgate. The alloy wheel design is new and blacked out, making it look sportier. 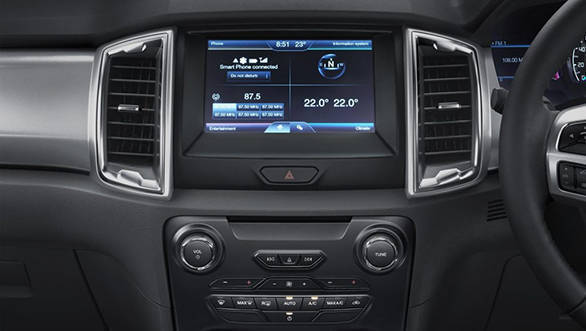 The interior is all new and features a dashboard design (top half) that bears close resemblance to the new Endeavour's. The brushed aluminium air-conditioning vents and the Ford SYNC 2 touchscreen infotainment system with colour display add a dash to premiumness to the ageing interior of the current EcoSport.

The lower half of the centre console features knobs and buttons for the HVAC and infotainment system and two 12V charging sockets. Expect plastic quality to improve over the current EcoSport's. While not clearly visible, we suspect the 2017 Ford EcoSport to feature a new instrument cluster that's lifted off the Endeavour's. It has a central analogue speedo, flanked by two colour screens on either side that displays information such as engine rpm, trip metres, radio station selected and a lot more. The steering wheel is also all new with buttons to operate the menu on the instrument cluster as well as the infotainment system and possibly cruise control, if it's made available in the Indian EcoSport.

We had reported earlier that Ford has improved the driving dynamics of the new EcoSport by revising the entire suspension set up. There power steering system also gets revised settings to improve feedback. Expect Ford India to continue with the current engines- 1-litre EcoBoost, 1.5-litre TDCi and 1.5-litre TiVCT.

With a slew of updates, the EcoSport will get the much needed arsenal to tackle fresh competition, mainly from the Maruti Suzuki Vitara Brezza. The Japanese compact SUV has taken the Indian market by storm and its competitive pricing also forced Ford to cut prices of the current EcoSport in India upto Rs 1.2 lakh. It will be interesting to see how the new EcoSport fares when it'll be launched in India.