Hero MotoCorp had announced that they will be coming out with their own engines by March. Here is proof of what could be the first motorcycle to come out of Hero's stables.  Image of the first 100-110cc Hero motorcycle testing near the company's plant in Gurgaon were recently captured by an automotive blog. 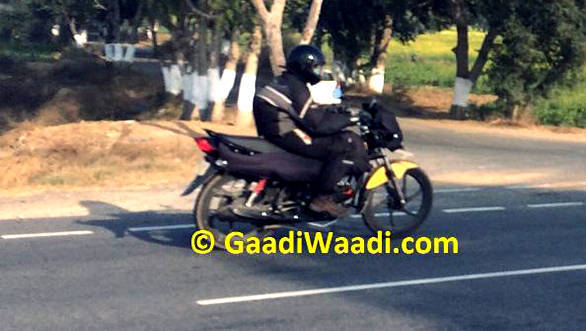 The new motorcycle could replace the ageing Passion. On the styling front, Hero seem to have gone back to their conservative roots after much experimenting with the design of the new Karizma. The motorcycle looks very similar to what the Passion looks like, with black cycle parts, alloy wheels, drum brakes at both the ends and a long and flat seat. The instrument cluster will likely be semi-digital.

On the mechanical front, this motorcycle is expected to have an all-new indigenously developed motor which might make close to 8PS of power. Expect a bump in fuel efficiency as compared to the current crop of Hero economisers. Hero could also bring in  the i3S technology as seen on Spendor iSmart.  The i3S technology stops the engine automatically if the motorcycle is left in idle for more than 10 seconds. It springs to life the moment the clutch is pulled, thus saving on fuel.

This new Hero motorcycle will also be added to the line-up for the export markets, something which Honda didn't allow them to do during the joint venture. The new bike will be the first to use this engine as well. Hero have been using Honda engines right from the time the joint venture was inked. Post the split in 2011, the company set up their own R&D centre and have been developing their new engines with the help of Engines Engineering, Erik Buell Racing and AVL. It is quite likely that Hero could also be testing the fuel injection technology that they have been developing with Magneti Marelli and will possibly roll out in 2017 across the range.