Suzuki Motorcycles India Limited has been on a roll this year. Products like the Let's scooter and the Gixxer motorcycle have ensured the company's good sales figures in the country. Come 2015, SMIL is expected to introduce more products and remove some from the market as well (Inazuma will not be sold in the country post March 2015).

One such motorcycle, the fully faired Gixxer, has been spotted testing in New Delhi. This motorcycle is set to be the new Suzuki flagship in the sporty commuter segment. Faired motorcycles have traditionally done well in the company. Yamaha already has the faired FZ in the form of the Fazer and now Suzuki will also like to grab a chunk of the former's soaring sales. 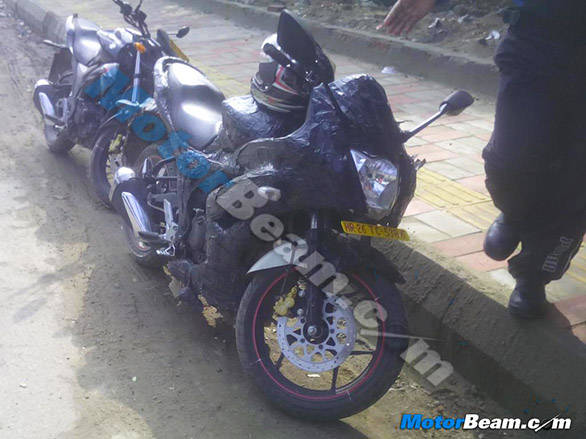 The test mule spotted here looks similar to the old Karizma ZMR, which in turn was inspired by the Suzuki Hayabusa. The mirrors, like in all faired motorcycles, are on the fairing. Apart from this, the faired Gixxer also has rim-reflective tape on the wheels and a full piece grab rail. From the image, it looks like all other cycle parts including the dual barrelled tail pipe have been retained.

Suzuki may have an updated version of the 154.9cc motor which powers the Gixxer for the faired version to offset the weight of the fairing. The motor in its current state of tune makes 14.8PS of power and 14Nm of torque. However, it's  more likely that they may go the Yamaha way and just use the current motor without any changes.

This faired Gixxer will likely be the third product to be launched by Suzuki in 2015. Others will be the GS150R update and a new scooter on the Let's platform. 2015 seems promising already, doesn't it?