This just in, the organisers of the Pikes Peak International Hill Climb have just decided that sportsbikes will not be allowed to participate at the hill climb from the next edition. The decision comes after due consideration to the incidents last year and the year before when two competitors lost their lives.

In 2014, Bobby Goodin lost his life when he was unable to stop his Daytona 675R after crossing the finish line of the hill climb. In the 2015 edition, Carl Sorensen passed away after his motorcycle went off a cliff 9 miles into the hill climb. The two casualties have been the only ones to have happened to motorcyclists since 1982. 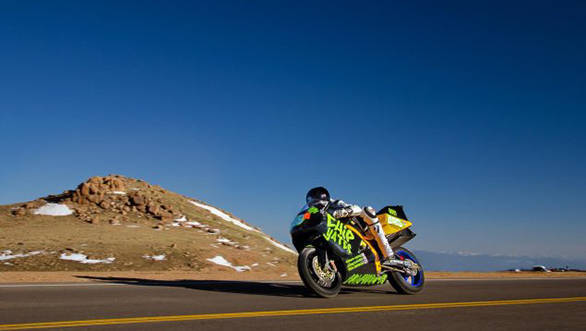 As a result of the losses in life, the organisers have decided to ban all motorcycles without a single piece handlebar. Mind you, the new regulation strictly says that the competing motorcycle has to come factory fitted with a single piece handlebar. While there is no official word about the technical reason behind the ban, it does seem to stem from a thought that motorcycles with clip-on handlebars are much faster. Officially the organisers have said, "Only motorcycles manufactured with one piece handle bars as original equipment will be permitted. Only OEM one-piece handlebars will be permitted. This Rule does not apply to bikes in the Pikes Peak Challenge Sidecar Class."

Thankfully this still means that motorcycles like the Ducati Multistrada, that we have been seeing so much of on the peak, can still take part.