With the 16 Asia Dream Cup riders all set to take part in the inaugural 2 Hours of Suzuka Endurance race, things were looking good. The competition was tough, though, especially since the grid included not only the riders from the ADC CBR250 class, but also riders on ST250s. With three Indian riders on the grid, it was Sarath Kumar and A Prabhu representing Team India, while Sumit L Toppo teamed up with Syunya Mori to form Team Japan/India. It was Toppo and Mori who qualified 16th on the grid in the ADC, while Sarath and Prabhu had to stay content with 27th on the grid overall, out of the 57 motorcycles that were to start the race. 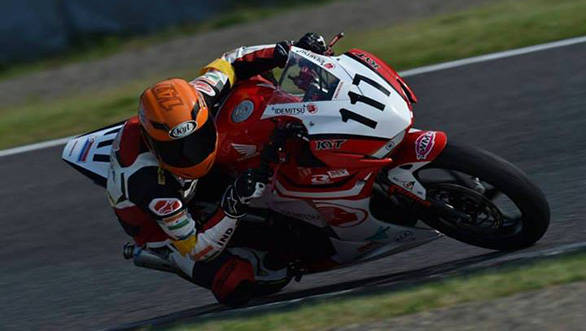 Despite the fact that they started 27th, Sarath and Prabhu managed to work their way up the order. While Sarath took charge of the motorcycle for the first half hour of the race, he managed to move from 27th on the grid to 21st overall during the course of the race. Then he handed the bike over to his team-mate Prabhu. However, due to the fact that he exceeded the pitlane speed limit of 60kph, Prabhu incurred a stop-go penalty that dropped them down to 30th position overall. When Sarath took over towards the closing stages of the race, it was only possible for him to move up the order by a couple of places, finishing 28th overall and 18th in the Asia Dream Cup class.

However Sarath stayed positive after the race. "It was a great learning experience for us," he declared. "Honda Japan had assigned each team a highly experienced Japanese mechanic and we were able to learn a lot from him about the nuances of motorcycle endurance racing - from how to change riders to the rules involved in the racing."

The three riders now head to Sentul, Indonesia for Round 2 of the Asia Dream Cup championship between the 13th and 15th of June, 2014.