The MRF FF1600 races are proving to be action-packed events. Despite the fact that Tarun Reddy seemed to run away with victory during the races in the first two rounds of the championship, the battle for race wins has become a closer and tighter affair, as was proved at the third round of the championship. In Advait Deodhar and Vikash Anand he has formidable opponents, who are giving Reddy a run for his money. After the three races that just concluded at the Kari Motor Speedway this weekend, Reddy leads the championship standings by six points, with Deodhar second. Here's how the races panned out. 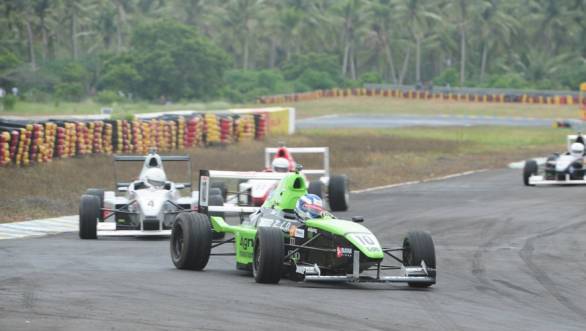 FF1600 Race 1
The first of the MRF FF1600 races saw Tarun Reddy start the race on pole position. Reddy got off to a good start, with Deodhar slotting into second place, while Vikash Anand managed to put himself third on track. As the race wore on, Reddy continued in the lead, with Deodhar and Anand closing the gap to him. But despite their best efforts, Reddy was impossible to catch. Tarun finished the race on the top step of the podium, with Advait second and Vikash third. Goutham Parekh finished fourth, with Lee Keshav taking fifth place.

FF1600 Race 2
There's no way a race weekend at the Kari Motor Speedway can be conducted this time of the year without the rain coming down. And with one lap done in the second FF1600 race, the clouds opened up and let loose a deluge that resulted in the race being red-flagged. The drivers came back into the pits to change to wet tyres. When the race was restarted, with Goutham Parekh on reverse-grid pole, Vikash Anand managed to pip Parekh and take the lead. Soon after that, Advait also got ahead of Parekh and stayed there. Tarun tried to make a fairly ambitious move on Parekh that resulted in an accident that caused the second red flag of the race, a move that saw him slapped with a five-place grid penalty for causing an avoidable accident. This time, at the restart, Advait got the better of Vikash and moved into the race lead, although temporarily. Vikash soon retook that position and finished the race first, with Deodhar second and Lee Keshav third. 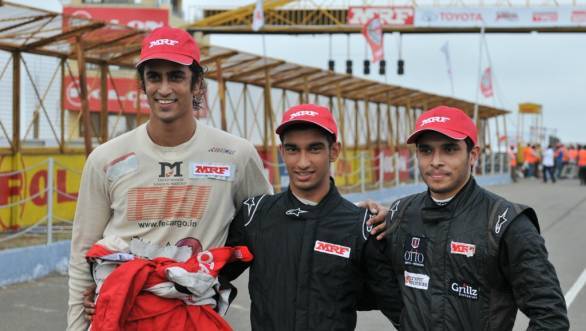 Advait Deodhar, Tarun Reddy and Vikash Anand who are currently at the top three contenders in the FF1600 class

FF1600 Race 3
The third race of the weekend saw Tarun start from sixth place on the grid. Advait Deodhar took the lead, with Goutham Parekh second and Vikash Anand third. Tarun was up for a battle though, moving into fourth place from sixth on the very first lap. After that he set about clawing his way to the head of the pack. It was, as things turned out, Advait, Vikash and Tarun who were locked in battle for the race win. Tarun moved past Vikash and took second place, and then managed to work his way past Advait too. And when he got past Advait, Vikash Anand also managed to slot into second. The three drivers finished in that order, with Tarun winning from Vikash and Advait.