The way we travel by buses has changed over the years. Now, there are long distance scheduled service coach routes pushing 2,000km and journey times stretching to 36 hours (case in point, VRL's BangaloreJodhpur Volvo service). This is why comfort and safety needs are leading to the adoption of European levels of vehicle specification, as seen in Volvo's 9400 PX and Scania's Metrolink HD.

Having recognised the growing popularity of such long routes, Tata Motors is examining the feasibility of introducing a double-decker touring coach, based on the latest Generation 7 of  Marcopolo's Paradiso 1800 DD model. Brazilian bus builder, Marcopolo has been Tata Motors' primary bodywork partner for the Indian market for the last eight years.

Four-axle coaches are common in South America for extremely long routes that can sometimes stretch over 4,500km and three days on the road. Auto Viação 1001, the first operator in Brazil to schedule double-decker buses on regular lines, runs a Double Class service with six anatomically shaped sleeper seats on the lower deck that recline horizontally into bunks, and 40 semi-sleeper seats on the upper deck.

In Brazil, the three-axle Paradiso 1800 DD is offered with up to 60 semi-sleep seats in single-class configuration. Here in India, because of the restrictive axle weight limitations, an 8×2 wheelplan is more feasible, Rohit Srivastava, CEO of Tata Marcopolo Motors Limited (TMML), tells OVERDRIVE.

Tata Motors already possesses the engineering and manufacturing capability to design and build a four-axle coach chassis, Srivastava points out - the company has been producing 8×2 trucks for atleast a decade. Marcopolo, for its part, brings in years of experience in bodyworking chassis' from Scania, Volvo, and Mercedes in Brazil. 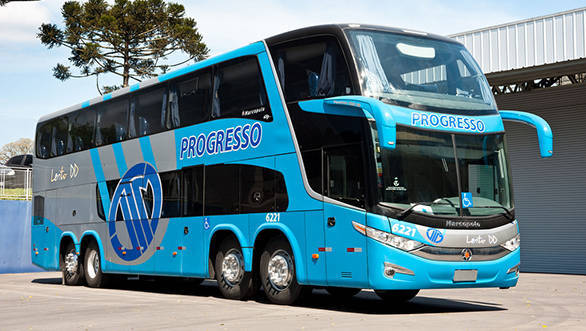 Volvo may have taken the lead in the high-performance long-distance luxury coach market, but homegrown Tata Motors is determined to push the envelope - with what could well be India's first 8×2 double-deck coach, based on Marcopolo's Paradiso 1800 DD model

Development of the double-deck coach for the operating conditions peculiar to India will involve a three-way engineering collaboration between Marcopolo, Tata Motors, and TMML. TMML prides itself on its independent design, analysis, and test capabilities. Srivastava says, "All projects at TMML are collaborative, involving the engineering departments of both Tata Motors and Marcopolo in the product design."

In addition to its body engineering and mass-manufacturing expertise, the strategic value that Marcopolo contributes to the venture is its facility for integrating a wide diversity of chassis modules from various OEMs into its own designs - something that's born out of decades of experience. In India, for example, Marcopolo provided specific inputs that helped Tata maximise the performance of its Ultra chassis (the Y1 light/intermediate-weight truck platform) in passenger bus missions.

Small wonder the Starbus Ultra range has been so enthusiastically received in the three years since it was launched. It's been purposed not only for school and staff transportation but also, configured in accordance with the Union government's specifications, to qualify for funding under the JnNURM II scheme, as a public transport bus.

A symbol of the unique collaborative approach is the 14.7m Paradiso 1200 three-axle high-decker, which will be the longest premium coach on the Indian market when it is launched, presumably in the last quarter of 2015. (The Paradiso 1200 6×2 is built to a standard length of 14m in Brazil, while the version showcased at the Auto Expo in New Delhi in 2012 measured 13.8m.) 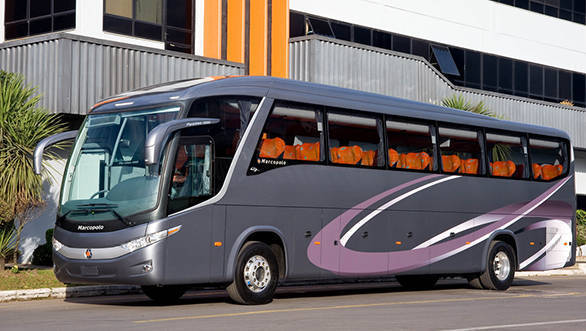 The Paradiso 1200, shown at Auto Expo 2012 as a three-axle coach, will also be available as a 12m two-axle version built presumably on the underpinnings of Tata's luckless Divo model

Not only was the new, longer bodyshell the result of a joint approach; even the LPO 2138 RE 6×2 chassis, according to a TMML source, was designed from scratch with inputs from Marcopolo. The coach has been in development for about three years now. Its three prototypes, built at TMML's Lucknow factory, have each covered more than 1,00,000km in testing.

A two-axle version of the Paradiso 1200 is also in the works and it's likely to be based on the underpinnings of the Divo, a stubbornly unsuccessful model that it is evidently intended to replace. The Divo is an integral coach built by Automobile Corporation of Goa Ltd (ACGL), Tata's other major bodybuilder affiliate.

With the acquisition of Hispano Carrocera, Tata inherited the Pininfarina-styled model that was introduced in a crudely down-specced version for India. Ever since its launch under Tata Motors' Globus brand in 2005, it faced complete market indifference. Relaunching it as the more refined Divo in 2011 with the 285PS Cummins ISBe electronic engine made no difference, Tata's vice-president, sales and marketing, R Ramakrishnan admits. 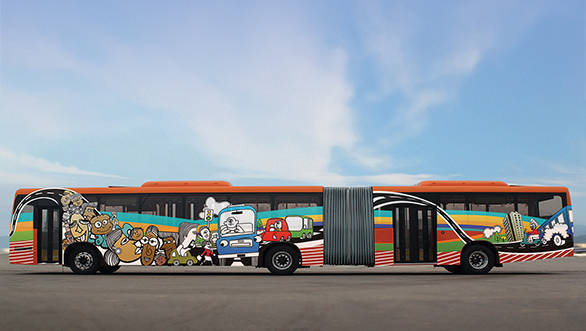 In the near future, TMML will introduce a new 12m front-engine coach model branded Magna that will spearhead Tata's assault on Ashok Leyland in the mid-segment - a section of the market where Tata has perennially trailed its biggest domestic rival. A sleeper version of the Magna is also in development and will follow subsequently.

Like the Starbus Ultra, the Magna exemplifies the joint development strategy that has made Tata's LCV/ICV buses such a selling proposition. While the Starbus Ultra was a completely new design, the Magna appears to be based on Marcopolo's Audace 'inter-urban' model for medium-distance scheduled services (routes within Goa for example), but (re)designed for a completely different mission profile.

TMML meanwhile, is also looking for an opportunity to engage with urban transport authorities for emergent city bus systems, most notably bus rapid transit (BRT). The company has supplied a batch of solo buses to Ahmedabad for the Janmarg BRT. TMML is preparing to deliver its first order for 30 articulated buses of the 18m Starbus Urban 9/18 model to HubliDharwad for the BRT being set up between the twin cities. These were the same models that were previously showcased at the 2012 Auto Expo.

Marcopolo is a leading supplier of articulated and bi-articulated buses for BRT fleets around the world including such celebrated ones as the TransMilenio in Bogotá, the Metrobús in Mexico City, and the Rea Vaya in Johannesburg, among many others. Both Srivastava and Sanjay Bhatia, who heads Tata's business with the state transport undertakings, are convinced that high-capacity bi-articulated buses, or 'metros on tyres', would make BRT operations more viable in the Indian context.

The enforcement of the new Bus Body Code regime with mandatory bodybuilder accreditation from April is set to transform the bus manufacturing landscape, as it will force the "roadside" bodybuilders, which account for the bulk of buses that ply on Indian roads, to invest in technology, cooperate in clusters, or shut shop. In such an environment, Tata expects to be a dominant player in buses, both fully built (primarily through TMML) and body-working (primarily through ACGL). 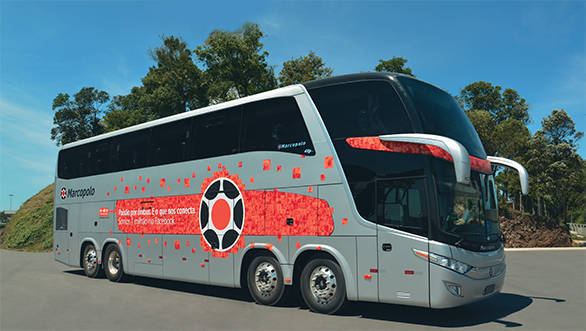 Volvo may have taken the lead in the high-performance long-distance luxury coach market, but homegrown Tata Motors is determined to push the envelope - with what could well be India's first 8×2 double-deck coach, based on Marcopolo's Paradiso 1800 DD model

TMML's Dharwad factory, with a two-shift capacity of 15,000 buses (it produced 13,600-odd units in 2014) is the largest in the world, and presently rolls out 50 buses a day. While there is no imperative to do so, TMML is amenable to bodyworking chassis from rival manufacturers at customer requests, like ACGL presently does.

Ramakrishnan, who is a director on the Tata Marcopolo and ACGL boards, says TMML has its hands full with Tata's requirements at the moment. But Srivastava reveals that TMML Dharwad does have the "flexible option" of running a third shift, which would take cumulative capacity across Dharwad and Lucknow up to the project's originally envisaged 24,000 units and open opportunities for other OEMs like MAN, looking for an entry into the bus business. These OEMs can benefit from TMML's engineering and mass-manufacturing expertise in India as they do with Marcopolo in other markets.