Tata Motors' Defence Technology Division recently secured one of the largest orders to an Indian OEM by the Indian army. The order in question is for 1,239 units of Tata's 6x6 multi-axle trucks. These monster trucks have material handling cranes mounted for transporting various military supplies - ammunition pallets, spares and other operational equipment for the Indian Army.

These locally developed all-wheel drive trucks that will be manufactured at Tata Motors' Pune and Jamshedpur facilities, have undergone a 25 month trial period. Having been put through Vehicle Research & Development Establishment's (VRDE) torture track, they are said to be able to take on almost any terrain that comes their way. 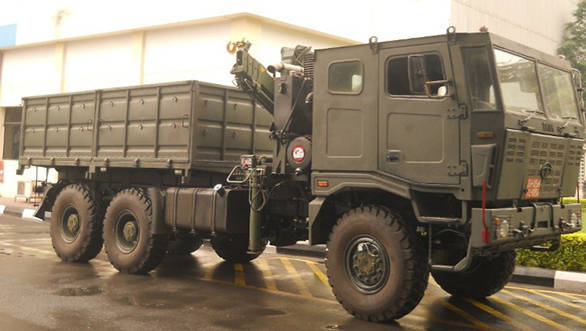 Designed for easy operation, they are fitted with a central tyre inflation system (CTIS) which allows the driver to control the tyre pressure from inside the cabin according to the terrain presented to him (much like Mercedes' 6x6). It is also fitted with a self-recovery winch, which helps in pulling itself (or other vehicles) out of a sticky situation. The cabin which is fully ready for armour upgradation is fitted with HVAC (heating, ventilation, and air conditioning).

Vernon Noronha, vice president of Tata Motors' Defence and Government Business Division, said, "We at Tata Motors are extremely proud to have bagged the single largest order among Indian OEMs from the Indian Army, for the most technologically advanced high mobility load carrier system ever built here in India. The order is a validation of our strategy and growth potential, for our durable and extensive range of defence vehicles, designed and developed with our evolving customers, including that of security forces across the world. As leading suppliers of mobility solutions to the country's security forces, we will shortly commence delivery of these high-mobility vehicles".

This all-wheel drive truck is claimed to be able to maintain a speed of 40kmph even on the most demanding terrains. Tata says they can be modified to suit various applications such as holding a common gun tower, a multi-barrel rocket launcher or even missile firing unit.