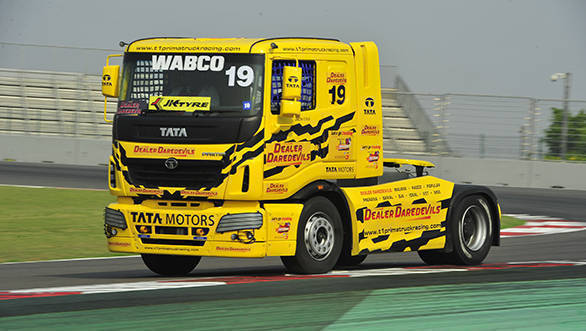 The truck will be powered by a 12-litre ISGe engine developed by Tata, in collaboration with Cummins Inc. With an output of 1,040PS at 2,600rpm and 3,500Nm at 1,600-2,200rpm, the new truck features more than twice as much power as the trucks competing in the season 4 of the T1 Prima Truck Racing Championship.

The engine drives the rear wheels through a 16-speed ZF gearbox, which helps keep the engine in the power band and puts the power to the wheels quickly. With such output figures at play here, this behemoth is capable of accelerating from 0-160kmph within 10 seconds, claims the company.

The 1,040PS T1 Prima Truck will not be competing in Season 4 but will only be showcased. However, there is a possibility that this truck might be used in the competition during Season 5 next year. The trucks competing in Season 4 are the same as those in Season 3, with the 370PS/1,550Nm 8.9-litre Cummins ISLe turbo-diesel engine mated to a 9-speed manual gearbox powering the truck.