MRF is back in international rallying. The Indian tyre manufacturer has announced that it will compete in the full season of the 2020 European Rally Championship, with Irish rally driver Craig Breen, and co-driver Paul Nagle. The duo will pilot a Team MRF Tyres Hyundai i20 R5 prepared by the Italian BRC Racing Team. 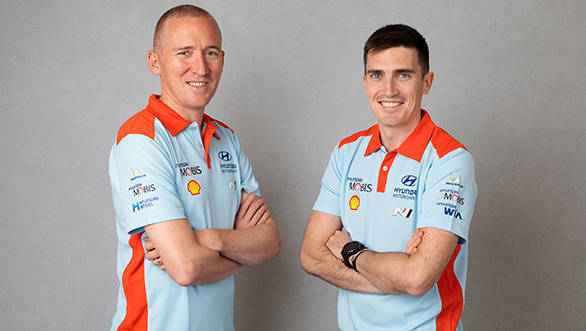 Breen is an accomplished rally driver, who has competed in 61 World Rally Championship events, and finished on the podium twice. He is the reigning Irish Tarmac Rally Champion, and also finished second in the 2015 ERC. His co-driver, Nagle, has won five WRC events in all.

The MRF Tyres Rally outfit has claimed nine Asia Pacific Rally Championship titles, three of which were won by Indian rally ace Gaurav Gill. The team also competed in four rounds of the World Rally Championship in 2018, taking part in the WRC2 class as a non-registered entry. The team then took a hiatus from active competition, and spent 2019 testing and developing the next generation of MRF Tyres with Breen, as well as former WRC driver Mikko Hirvonen. The team will make a return to active competition at the Azores Rallye between March 26 and 28.

MRF Tyres Vice-Chairman & Managing Director, Arun Mammen has confirmed the manufacturer's long-term interest in and commitment to rallying. In a press release issued by the company, Mammen was quoted as saying, "We know it will be a challenge to compete with our European rivals but we are committed to rallying in the long term and we are aiming to learn and develop. After all, MRF Tyres is India's number one tyre company and pioneering motorsports in India."

Speaking specifically of their foray into the ERC, Mammen said, "MRF Tyres has a long and proud history in rallying in India and the Asia Pacific region. With nine APRC titles, it is the right time to take the next step and take Indian motorsport into the European Rally Championship. To work with great professionals in the field like Craig Breen, Paul Nagle, BRC Racing Team and Hyundai Motorsports is a great privilege."

Speaking of his association with MRF Tyres, Breen said, "I am really happy to start this adventure with MRF Tyres. We worked together last year placing emphasis on tyre development. Now I am really looking forward to embarking on this journey in the European Rally Championship. It will be a great adventure to get back to some rallies I have done in the past along with some new rallies. It will be a great year with MRF Tyres, BRC Racing Team and Hyundai Motorsport. I am looking forward to the Azores Rally and getting the program started."

Meanwhile, Hyundai Motorsport Team Principal, Andrea Adamo said, "I am really looking forward to seeing the results of this new partnership between MRF Tyres and the BRC Racing Team. The European Rally Championship is one of the most important series in the sport. The season includes some very famous events, and is a great test for the cars, and for the tyres in all conditions. MRF Tyres has already had great success in rallying, establishing themselves as very competitive option for drivers and teams. Hopefully this season between them, BRC and the Hyundai i20 R5, they can add more to their story in motorsport."