The first of the 2014 Formula 1 cars has finally broken cover and it's a boy! Okay, jokes apart the Sahara Force India VJM07 looks quite masculine in that new black livery doesn't it? And they've managed to retain the team's original colours of saffron, white and green as well, to keep the tricolour flying high too. The images of the car and the new livery have been unveiled ahead of the official launch of the car at the first official test session at Jerez next week. 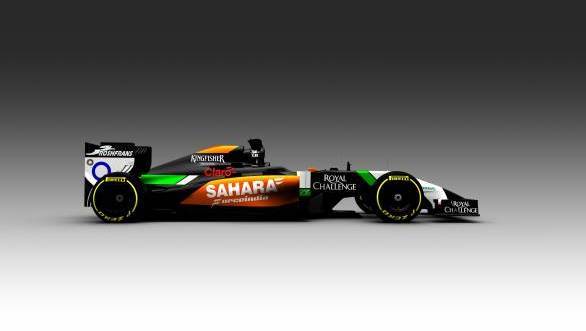 While there aren't too many details available in terms of what aero modifications have been made to the car and what the front wing of the car will look like(which is primarily what all F1 fans are eagerly keeping a watch out for) we're just glad to have caught a glimpse of it at all. The primary change, of course, is the change in livery. "The new car livery reflects the way Sahara Force India is evolving. I've always believed the saffron, white and green livery has made our cars the most eye-catching, but adding black as a main colour gives us a fierce new look. The national colours of India remain an integral part of the car, but the tiger has become a panther! As we enter our seventh season with new partnerships and new names on the car, our contemporary new look helps signal our ambition, said Vijay Mallya, Team Principal of Sahara Force India.

But what we're more curious about are the technical changes that have been made to the car. And Technical Director Andrew Green was able to shed some light on the changes for us. "Apart from the obvious, it doesn't look hugely different, but it is; almost every single part is a new design, from the front wing right back to the diffuser. Its genetics still lie in the 2013 car, but we've had to achieve the same results in a slightly different way. The nose is a stand-out but from the nose backwards it looks quite similar. It's a little bit 'fatter' for the increased cooling requirements, but we hope to trim that out during the early part of the season. To be competitive we have to develop and because there are so many areas that need significantly refining, optimising the performance of this car is going to be a big challenge."

Green went on to state that the other important changes in the car were the aerodynamic changes. "There's quite a dramatic reduction in downforce, especially with regard to the exhaust  there's now very little you can do to capture the exhaust energy. That's a big loss on the exit of corners, so traction becomes a premium. That, combined with a change in the front wing width, has changed all the flow structures on the car completely."

What of that front wing, though? Well, like one would imagine, it's the front wing that is terribly important. Green went on to say that "The front wing change is significant; it's a completely different concept for 2014. Visually it's one of the biggest changes. That was a big task, rebuilding all those aerodynamic structures from the front to the back to complement the smaller rear wing. The loss of the lower rear wing, or beam wing, leads to a significant loss of performance. That lower wing helped connect the diffuser to the top wing and gave those two areas a lot of support. Without it, it's become very difficult to extract performance and it's going to be quite a tricky area to keep stable. So there was quite a dramatic loss in headline downforce numbers, while there was also a drop in drag, which has fallen quite dramatically as well."

Meanwhile, Nico Hulkenberg, who has spent a year away from the Sahara Force India team is now back with the squad and has great hopes for the 2014 season. ""I hope that we have a competitive car and that I can deliver good results, just like I did at the end of 2013. But again it's really hard to define and set the targets with so many question marks in the game. Obviously we want to do well, we want to score a lot of points and I think maximising our package and our performance is the main target for now."

The first accurate measure of how the team will perform in the coming season of Formula 1 will be gauged at the Jerez test. It's just a week away now. Watch this space!