The heart of a lion

You think you have the heart of a lion! Think again. Meet Toomas Triisa, he hails from Estonia, is 34 years old and loves snowboarding. Toomas also happens to be a rider on the 2017 Dakar, except unlike most others he rides in a class where only some 13 other riders have chosen to enter. This is the Malles Moto. It means you ride alone. There is no team to back you up, no service crews waiting for you to arrive to the bivouac and repair your bike for the following day, no hospitality that will arrange for your catering, and no motorhomes that will provide you a warm bed or a clean loo! 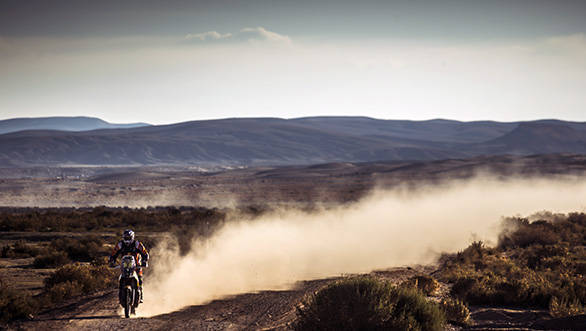 Riders in the Malles Moto take care of their motorcycles themselves. So they leave the bivouac every day at 4 in the morning, ride through the stages with as much focus and determination as any other rider, service, repair and clean their own motorcycle at the end of the day's stage, prepare themselves for the next day's stage which means getting their pace notes ready, feed themselves and, with whatever little time they have left, catch up on some sleep. They do this for 12 days in a row, sometimes longer. And yes, they pay the same entry fee as any other rider. Sheer insanity!

So what drives them? Well, the Dakar over and above all is the mother of all motorsport events in the world. It's the most gruelling test of man and machine in a racing environment. You can finish the event and have that sense of accomplishment for having ridden through one of the foremost 4x4 endurance events in the world. Or, you can race ahead of some 400-odd competitors (in 2005, 688 competitors took the start) to win it, and carve a name for yourself in the hall of legends. So, the first tick in the box for those in the Malles Moto is to simply participate in the event.

Now the Dakar, by no stretch of the imagination, is a hard event; it's a colossally tough event that breaks the best drivers and riders in the world. For most, therefore, the service crews and teams that handle most of what may seem mundane tasks is a welcome relief at the end of the day.

After having ridden through, on average, 600 kilometres, half or slightly more of that at full pace, across terrain that ranges from sand dunes to rivers to rocky river beds or flat desolate plains, heat, cold or rain, most riders need to provide their bodies the chance to repair itself for the day ahead. They need to recover both physically and mentally. At the end of the day, you don't want to worry about why your suspension does not feel right or why is the engine not delivering the right amount of power? You want to leave those tasks to someone else. You want to get a hot meal, work on your pace notes and then shut the world out for a few hours before you pound yourself into mush the next day.

Are these riders then challenged by budgetary constraints? For some yes, money is a constraint. The entry fee to the Dakar costs roughly 16,000 for a competitor - it's the same fee irrespective of what class you enter in. For those in the Malles Moto, you pay an additional 500 or so for the use of two common trucks that will carry your spares all of which have to fit inside a box provided by Dakar officials. So each truck skips over the other to the next stage thus ensuring no rider in the Malles Moto category ever has to wait for his spares to arrive at the bivouac.

You then pay for your motorcycle; there is the additional cost of modifying it, buying an economical amount of spares or rather as much as the Dakar officials allow you to have on those trucks to ensure you keep running in the Dakar, shipping the bike to South America, carnets, visas, permits etc. all of which cost a tidy sum at the end of the day. The savings come in not having an extra pair of hands, or two or three to help out with things. Or having your own personal service truck to carry a slightly more generous number of spares. You would still end up paying a small fortune, but there is one more reason for why these guys do it alone.

Most of the riders in the Malles Moto category are there for the thrill of the ride. The opportunity to ride unbridled through South America is a lure too tasty to resist. Then there is also the sense of adventure, of having gone at it alone. Call them stupid or brave, the line separating the two is a very fine one, and which side of that line they exist in is simply a matter of perspective.

Toomas, who I spoke to, has already raced with a team in 2014. This year he simply wanted to see what it was like to go solo. He's in this most probably to challenge himself, since the next thing he mentioned was that this was the first and last time he would be doing this. And I spoke to him at the midpoint of the 12-day-long event! I guess he understands his limits clearly now. So Toomas is not only a rider in the Dakar, he is also his own mechanic, his own team boss, his own analyst, his own mentor! Like Toomas there exist others who do this purely out of a sense of adventure.

At the end, when you ride across the finish line of the Dakar, you know you fought the beast that is the Dakar and emerged victorious. I ate it up and spit it out. I faced it all and I stood tall. And did it my way.