This Sherp ATV can go anywhere

The Sherp ATV has caught the internet by storm. This new four-wheeled offering from Russia is a one-of-a kind vehicle which on first look, seems to be the outcome of a secret military project. However, in reality this is a commercially made ATV. It not only manages to make jaws drop with its sheer size and presence but can actually tread into the unknown and inaccessible places known to mankind. Don't believe us? See the video below.

It is made by Russia-based Sherp, which was established in 2012 in partnership with renowned technologist Aleksey Garagashyan. The company says its goal is to present a vehicle, which has no equivalence in passing ability. After working for three years on developing technical solutions and hardware, the company has begun mass production of the Sherp ATV. 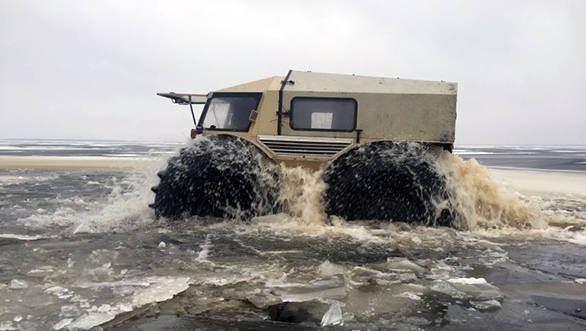 It is powered by a 1498cc, four cylinder, Kubota V1505-t diesel engine which makes 44.9PS and is mated to a 5-speed gearbox. It can achieve a top speed of 45kmph on land and 6kmph in water. The Sherp ATV also gets a skid steering drive system which allows the wheels on both sides to be independently operated.

In terms of dimensions, the Sherp ATV measures 3,400mm in length, 2,520mm in width and 2,300mm in height.  It gets a steel body and tips the weighing scales at 1300kgs. It can seat four people and carry a one ton payload. 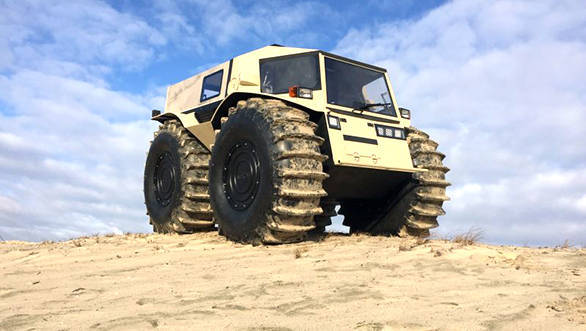 What makes the Sherpa ATV unique is that it gets a massive 600mm of ground clearance and sits on 63 inch tall tubeless tyres. It also comes equipped with patented self-inflating tyres which make it easy to adjust the pressure and ground clearance as per the available traction and obstacle height.

The Sherp ATV is available in two trims. The Standard trim gets a soft top, automatic interior heating system, halogen headlights, driver and passenger seats with seatbelts, two batteries, handbrake and valves to drain out water from the body. The top Standard plus trim gets a hard top in a choice of colors and strut equipped doors which can be opened upwards. The Sherp ATV comes equipped with a 58litre fuel tank as standard. Buyers get the option of going for additional four 50litre fuel tanks. The other optional extras being offered include 90watt diode headlights, a high-power generator, additional independent heat warmer system and a trailer.

The Sherp Standard trim is priced at $65,000 and the Standard Plus trim is priced at $70,000. The company is also offering this vehicle for lease. The Sherp ATV will be showcased at the 39th Hunting and Fishing in Russia international exhibition which will be held from February 24 to 28, 2016.