Toyota Kirloskar Motor will start accepting bookings for the Toyota Urban Cruiser in India from August 22. Customers will be able to book the Urban Cruiser online or at a dealership by paying Rs 11,000. Alongside this, the company has also revealed specifications of the new sub-four-metre SUV.

The Urban Cruiser will be powered by the same engine as the Vitara Brezza it's based on. This means the K15B 1.5-litre four-cylinder petrol with 105PS and 138Nm. This will be paired with a five-speed manual and four-speed torque-convertor automatic. The Urban Cruiser will also get the 48V mild-hybrid set up for the AT versions.

There is a better sense of the Urban Cruiser's looks as well now. The SUV gets a new grille similar to what is seen on the Fortuner with the twin horizontal slats and the vertical elements finished in silver. Also new is the larger foglamp inserts in the front bumper. The Urban Cruiser will come with dual-tone colour options, including a new brown shade. The interiors will also be heavily derived from the Vitara Brezza. However, the Urban Cruiser will get dark-brown interior upholstery and trim pieces. 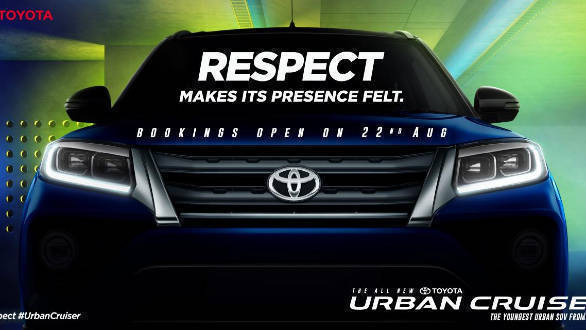 The feature set will also be very similar to the Vitara Brezza. Top-spec versions of the Urban Cruiser are expected to come with LED head and tail lamps, 16-inch alloy wheels, keyless entry and go, climate control, cruise control and auto headlamps.

This will be the second car to come from the Toyota-Suzuki partnership in India. The two Japanese companies signed an agreement in 2018 to allow them to co-develop models supply chains and technologies for global markets. Prices for the Vitara Brezza start from Rs 7.34 lakh for the LXi, going up to Rs 11.40 lakh for the ZXi Plus Dual Tone AT. For the Urban Cruiser, Toyota could follow the same strategy that it did for the Glanza. It could bring in the mid and top-spec variants of the Suzuki at a similar or marginally lower price. The differentiating factor will be the three year/100,000 km warranty that the Urban Cruiser will come with as standard.