Triumph switching from 250cc motorcycle to a bigger platform?

A few days ago, British motorcycle manufacturer Triumph, according to Visor Down shelved the 250cc motorcycle project. If you remember this motorcycle was shown as a sketch at the Milan Show last year and was supposed to enter production at the upcoming factory in Narsapura, near Bangalore, Karnataka. The motorcycle and was expected to hit the Indian market at a competitive price and be exported from here to the world. Triumph was rumoured to be planning a sportsbike-style initial model followed by a more retro-style model billed to be called the Cub. And now that project, evidently, has come to a grinding halt. 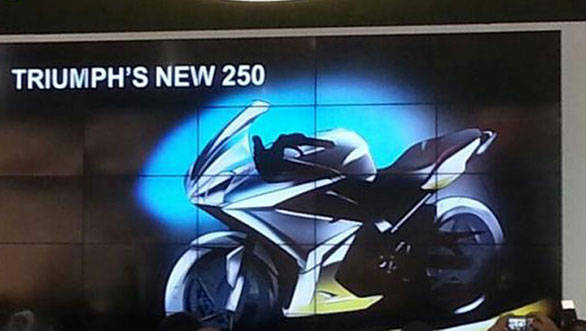 Triumph India have been reluctant to talk about the new plant since day one and the 250cc project is something they've been tight-lipped about. But the shelving of the 250cc project is actually, in our eyes, a ruse. What has happened is much simpler. Triumph were working on a 250cc motorcycle while that segment of motorcycles, globally, was seeing a steady rise in displacement. If Triumph were to continue down the path and launch the new bike with the 250cc engine, it would be a knife in a gunfight.

What I expect is that the Triumph are working hard at realigning the project so that the displacement can be raised to 300cc at least so that as and when Honda launches the CBR300R (whether before or after the Triumph), the British competitor has the right displacement to compete. As you know, we also believe that Yamaha's reluctance to talk about the YZF-R25 for India, is also because the company believes that the presence of the KTM(and their pricing) as well as the CBR250R/CBR300R is forcing the lion's chunk of the motorcycle in this segment to follow the pattern to be competitively priced. And that pattern is local production - not CKD or CBU - and a single cylinder engine. Both are solutions to the pricing problem.

The Kawasaki Ninja 300, which competes directly with these bikes in international markets is dramatically more expensive for precisely these two reasons. First, it is assembled here rather than manufactured and second, it is a two-cylinder engine and that is more expensive.

To return to the Triumph, I further believe that the 300cc platform will be scalable to some extent and might even be able to extend as far as 450 or 500cc. Commercially, this would be the cost-effective way to do this. Having to develop two platforms 200cc apart would be far costlier than having a platform that can span both - a fact that the KTM line-up in India is a very good example of.

The new motorcycle(s) are critical to Triumph because the British manufacturer knows its future growth will come from markets like ours where despite the size of the market, the premium market in under-developed and has few products. On the other hand, India is a youthful country full of young people who automatically think of vehicles as aspirational acquisitions and lifestyle extensions. A fertile place for a vibrant premium market, if the economy grows steadily.

Has the 250 been shelved? The quote at Visor Down attributed to Paul Stroud, director sales and marketing says the project has been put on hold. Does that mean Triumph have stopped working on their Indian-made entry-level motorcycle. If I were a betting man, I'd bet that they have not and that the project timeline - a product set for the end of 2015 - will not see a significant delay.