Indian two-wheeler brand TVS could be launching the Apache RTR 200 Fi powered by ethanol today, states CNBCTV18. While we are yet to receive an official confirmation from the motorcycle manufacturer, the launch of the ethanol powered Apache RTR 200 Fi could further strengthen the focus on vehicles using alternate sources of fuel. At the recently announced Union Budget 2019, the emphasis was on EVs and going in line with the same, it is not too far when mainstream manufacturers will launch their new-age products powered by the likes of ethanol. This version of the TVS Apache RTR 200 Fi was first showcased at the 2018 Auto Expo. 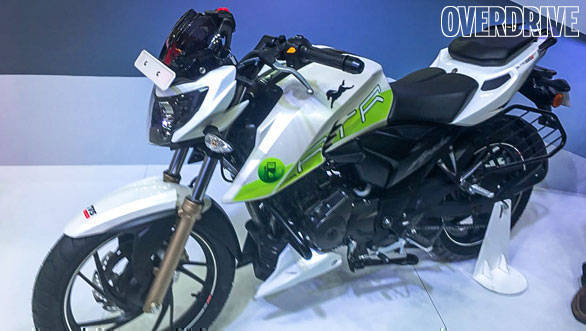 Last year, the Indian government announced a National Policy on Biofuels  which mentioned of 20 per cent ethanol to be made mandatory for blending in petrol by 2030. Just for your reference, bio-ethanol is a resultant of biomass that consists of sugarcane, sugar beet and sweet sorghum. The Union Petroleum minister Dharmendra Prasad, had already confirmed about the ethanol blend that was increased from 0.67 per cent in 2012-13 to 6.2 per cent. It is also being said that new-generation bio refineries are being set that will transform agricultural residue to ethanol, which will also curb pollution taking place due to the burning of crops. In terms of sugarcane production, India is the second largest after Brazil. This year, India has produced an estimated 28.2 million tonne of sugar. Union minister for road transport and highways, Nitin Gadkari recently informed the sugar mills to produce ethanol to offset the surplus of sugarcane production.

The TVS Apache RTR 200 Fi Ethanol comes with an E85 motor that makes 21PS at 8,500rpm and generates a torque of 18.1Nm at 7,000rpm with a claimed top speed of 129kmph. This new offering is equipped with a Twin-Spray - Twin-Port EFI technology which, according to TVS, ensures faster throttle response, better rideability and also reduction in the overall emission levels. Compared to a regular IC engine burning petrol, one running on the ethanol blends make lesser power due to the fact that ethanol has 70 per cent of the calories of petrol. This deficit is compensated by injecting more of ethanol into the engine cylinder. To increase the flow of ethanol, a recalibration of the fuel injection unit or even changing the throttle body completely, may be required. Another way to extract more power from ethanol blends is by raising the compression ratio of the engine. Essentially, an 8-9:1 compression ratio can be increased to 10-11:1. 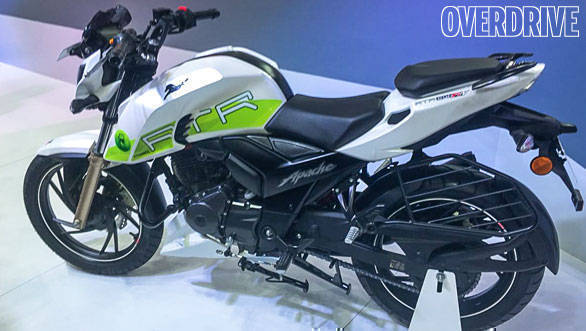