Two-wheeler sales in India for April 2016

Just like passenger vehicle manufacturers, April 2016 has turned out to be a good month for some two-wheeler manufacturers. Some manufacturers like Bajaj Auto have registered a modest growth of 2 per cent while others like Yamaha India have seen a massive jump of 66 per cent. Here's a compilation of the sales numbers from individual manufacturers. 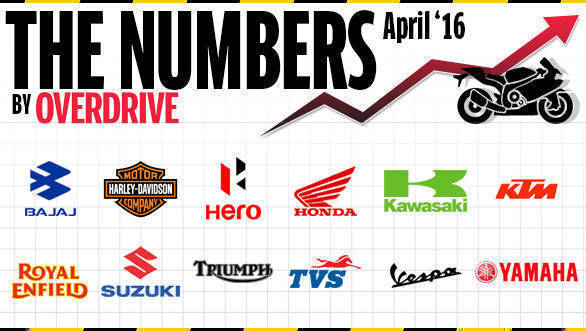 Bajaj has registered a 2 per cent growth in motorcycle sales with 2,91,898 units sold in April 2016. During the corresponding period last year, the manufacturer had sold 2,85,791 units.

Bajaj Auto had recently launched the V15 motorcycle which is powered by a new 150cc DTS-i engine and it's styling is a mix of the cafe racer and cruiser body styles.

In March, HMSI began dispatching the Navi to it's showrooms across India. To read our first ride review click here.

The company has announced an impressive 66 per cent growth in sales with 63,927 units sold in April 2016. In April 2015 the company sold 38,568 units. In an official release, the manufacturer has attributed this stellar growth to it's focus on expanding the presence in tier II and tier III cities and the ongoing customer centric activities.

Speaking on the company's sales performance, Roy Kurian, vice president sales and marketing, Yamaha Motor India Sales Pvt. Ltd. said, "As the Q1 growth trajectory of 47 per cent steadily headways into the current quarter with 66% growth in April 2016, Yamaha will continue its consolidated performance of steady sales growth along with more network expansion. Fascino is doing extremely well and with Cygnus Ray-ZR launched, Yamaha is looking to further augment its position in the scooter market by targeting 10% market share by end of 2016. Yamaha's introduction of Saluto RX will sport more excitement as now it will cater to the requirements of basic commuter segment."

A few days ago Yamaha India inaugurated a spare parts centre in Tamil Nadu which is spread over 30,000 square metres. In mid-April, it launched the Saluto RX which claims to deliver a fuel efficiency of 82kmpl.

The company has announced a 21.6 per cent growth in domestic two-wheeler sales with 1,97,692 units sold in April 2016. In April 2015 the company had sold 1,62,516 units. Around three months back TVS Motor Company had launched the new Victor in two variants along with the RTR 200 4V. Deliveries of both motorcycles have begun and they are expected to attract more prospective buyers into showrooms.