Two-wheeler sales in India for January 2016

The start of 2016 has been a good one for most two-wheeler manufacturers. Some have seen modest growth while others, like Yamaha have had a big growth. Read on for the numbers from each manufacturer. 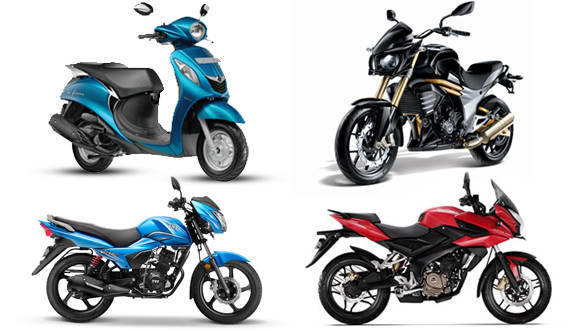 Mahindra is one of the few manufacturers here to have seen a decline in sales from December 2015. Last month, the company shifted 12,112 units of which 1,624 were exports. This month, that number has reduced to 10,317 units, 1,077 of them being exports. Mahindra will be hoping for a surge in sales following the launch of the new Gusto 125 and the interest generated from the Auto Expo.

Bajaj, meanwhile, has seen a two per cent growth in the sales of two-wheelers. The company sold 2,46,955 motorcycles in Jan 2015 but crossed the 2.5 lakh mark for a total of 2,52,988 motorcycles in Jan 2016. Commercial vehicle sales, meanwhile, slumped by 2 per cent over the corresponding period last year with a total of 40,951 units sold. Out of the above units mentions, 1,32,069 were exported which marked an 8 per cent drop in overseas sales. Considering sales from April-Jan, motorcycle sales have remained constant while commercial vehicles sales have grown by 1 per cent. Exports, however, have seen a 3 per cent drop.

It's been a good month for TVS, showing a healthy 12.4 per cent jump in two-wheeler sales in Jan. Of this, domestic two-wheeler sales grew by 7.7 per cent with 1,72,162 units sold in Jan 2016. Of those, scooter sales have grown as well, posting a 14.1 per cent growth. Growth was consistent across all segments with the three-wheeler department registering a growth of 4.2 per cent with a total of 7,252 units sold.

Yamaha has had the most success in January 2016 with a massive 49 per cent rise in domestic sales. The company sold 58,743 units in Jan 2016 versus 39,313 in Jan 2015. This comes after the recent launches of the R3, R-15S, and new schemes for the FZ and Fazer. However, the biggest contributor has been the Fascino scooter which continues to sell in large numbers. Yamaha will be looking augment this with its releases at the Auto Expo. Stay tuned.