A spy image has emerged with gives us quite a vivid look at how the next Land Rover Defender SUV will look like. The picture is from a digital instrument cluster from one of the test mules doing the rounds currently. The Defender is expected to be unveiled at the 2019 Frankfurt Motor Show in September.

The picture shows that the Defender has stuck to the boxy original design. There is a slab-sidedness to all elements, much more than other cars in the Land Rover line-up. The flared wheel arches, chunky alloys and the vertically stacked gills on the sideshow this SV's off-roading intent. The unique Defender touch of a the roof-mounted glass section and the square third-row window, now get a floating-roof effect for more style. There's also an externally mounted spare-wheel and squarish headlamps and fascia. The model seen here is possibly the LWB five-door version, a shorter SWB three-door model will also be available.

No pictures are available of the interior but it can be expected to significantly more spacious and a functional layout and large easy to use buttons. The TouchPro infotainment will also be available as will be a host of safety and comfort features. 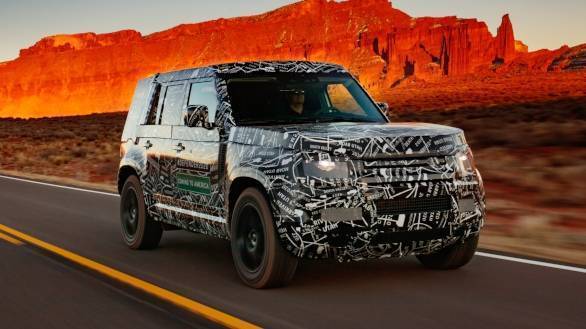 Engine options will most likely mimic those of the Discovery Sport, with a 2.0 litre 180PS Ingenium diesel being the best seller. There should also be the 2.0 litre petrols and the supercharged 3.0 litre inline-six motors with 48V architecture available over the course of its lifecycle. A hybrid option and EV could be a possibility as well, given that the Modular Longitudinal Architecture it is based on is compatible with these powertrains.

The Land Rover Defender is one of the stalwarts of the car world. The Defender started life as the first Series 1 Land Rover and was the basis on which the entire brand has been built. The new one is expected to carry forward the same off-roading tradition but in a more modern, luxurious package.