A set of new spy photos have appeared which offer the clearest idea yet of how the front-end of the Renault HBC (Kiger) might look like. The SUV will be sub-four meters in length and be built on the same platform as the Triber MPV, which was launched in 2019.

The face seems to be heavily influenced by the Kwid's styling brief, although the SUV character seems to have been dialled up quite a bit here. The split headlamp treatment continues here too, with the low-set headlamp getting a three-part look here. The bumper and air dams surrounding this are more aggressive in this iteration. The top-half remains quite familiar with the slim LED lighting and the typical chrome-lined Renault grille. This spy image also shows the HBC gets a new design for the faux alloy wheel covers. 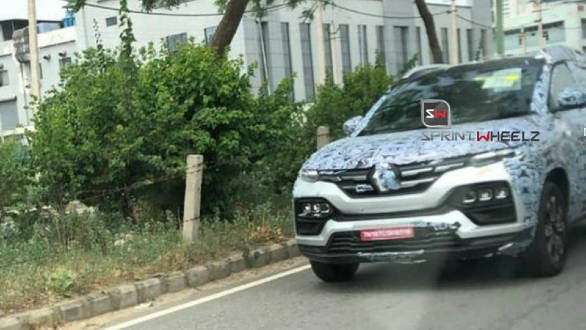 The side profile is more squared-off than the Triber's and the rear end of the SUV should get LED tail lamps and a shark-fin antenna. The rear seems to get chunky bumpers and a heavily raked windscreen for a sportier effect. The interior should derive heavily from the Triber, although with new elements like a floating touchscreen unit and unique design to the centre console.

The SUV is expected to be powered by the new TCe 100 1.0 litre 3-cylinder engine that debuted at the Auto Expo 2020 with 100PS and 160 Nm. The N/A 1.0-litre producing 72PS of power and 96Nm of torque may continue in the low-spec versions. The car will get both, 5-speed manual and the AMT transmission options. Renault is expected to bring the CVT transmission for the turbo petrol variants.

We expect the Renault HBC (Kiger) to be very competitively priced, with prices starting at around Rs 7 lakh. A launch is expected in the coming months.