Few names in the world of motorsport and supercars alike can evoke as much emotion as the McLaren F1 does. The supercar was the first of its kind in a multitude of platforms. It was the first production car to use a carbon fibre monocoque chassis. It was the first production car to feature a central driving position, with passengers accommodated either side. Its engine bay was lined with gold, as it's the best heat reflector there is. No expense was spared to ensure that it was the definition of perfection. As a result, it held the title of the fastest production car for over a decade at 384kmph, something that wasn't its main purpose to begin with. 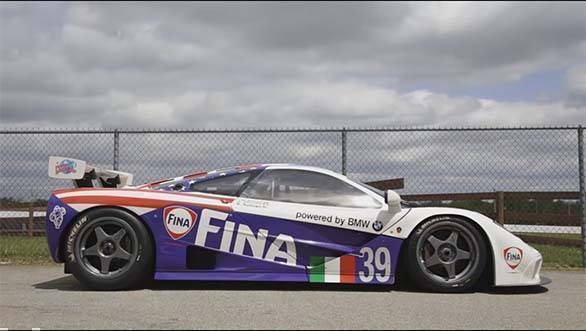 In the GTR variant, the McLaren F1 got a few tweaks over its road-going cousin. The BMW sourced 6.0-litre V12 got an air restrictor, as per race regulations, which reduced power by 27PS but still made for a huge 608PS and 651 Nm of torque. A new aero kit increased downforce and the interior was completely stripped of all sound insulation, exposing the then exotic carbon fibre panels.

The F1 GTR in question is chassis #17R, owned by BMW North America. The venue is the Mid-Ohio race course located in Morrow County, Ohio. The track is fairly straightforward, save for the massive elevation changes in the corners. The brave (and lucky) driver piloting this legendary piece of kit is Bill Auberlen and by his beautiful heel-and-toe work it's clear the man is more than upto the job and quick enough to rival any modern flappy paddle gearbox. All of this is with the most exhilarating V12 soundtrack screaming in the background. This write-up however, doesn't do the slightest bit of justice to the video. So go ahead and watch!