Video worth watching: Road to Bonneville Spirit of Munro

Indian Motorcycle, to commemorate the 50th Anniversary of the land speed record set by New Zealander Burt Munro at the Bonneville Salt Flats in Utah, has built a streamliner aptly named the 'Spirit of Munro'. In August 1967, Burt had set a new record on his 1920 Indian Scout which he had modified for the purpose over the years. This year, Burt's great grand nephew Lee Munro has piloted the Spirit of Munro 50th Anniversary 2017 Indian Scout to a new land speed during the recently concluded Bonneville Speed Week with a run of 307.3kmph on August 12. 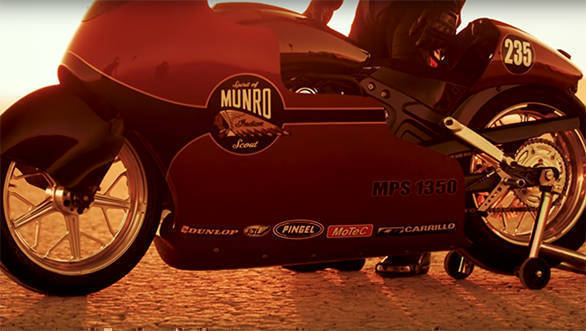 The video shows the team's previous efforts at the El Mirage Dry Lake Run, in California. Lee Munro set a new record in the MPS-G (Modified Partial Streamliner) 1,350cc class by hitting 300.3kmph during one of his runs. The video takes a look at the rich history of Munro's legacy and his determination to land in the record books. There is also a short interview with Munro's son John. While the video was shot as a run up to the Bonneville Speed Week, where the team from Indian Motorcycle aims to hit 320kmph.