Elon Musk touts his Tesla cars to be some of the safest around and apart from a smattering of untoward incidents involving Tesla's Autopilot autonomous driving system or its misuse, the cars more or less live up to this claim with the Model X SUV being the first to achieve an NHTSA 5-Star safety rating in every category from the US government. 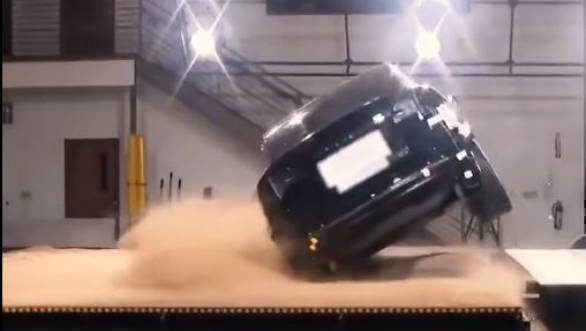 Today's video worth watching which shows the Tesla Model X undergoing rollover testing is proof of this. A black Model X is shown to be undergoing an internal 'soil trip' test where it simulates the SUV slide sideways from tarmac to a loose surface like sand. Three attempts are shown, but the Model X never really find itself on its roof. This quite impressive given that such a test usually heavily disbalances most cars, especially tall SUVs.

See it for yourself here:

Model X is the first and only SUV to achieve a NHTSA 5-Star safety rating in every category and subcategory, with the lowest probability of rollover and overall injury of any SUV pic.twitter.com/V0f8ljeIBp