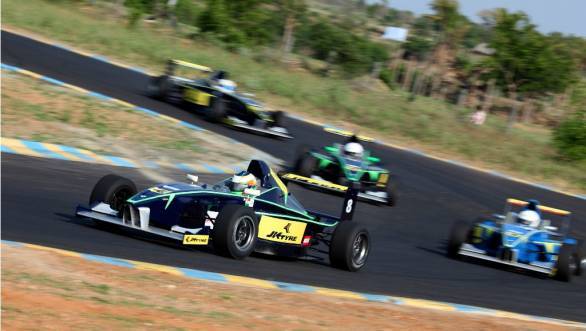 Vishnu started Race 1 on pole position and got off to a good start, with Akhil Rabindra following him in second position from second on the grid. Vishnu's lead wasn't threatened once through the race and a gap of 11.846 seconds separated him from Rabindra as the chequered flag fell. Finishing third was Nayan Chatterjee. Given that it is Nayan's first ever season in the FB02 championship, it was an impressive performance indeed, one that left the young driver himself a little surprised as he admitted in the post-race press conference. 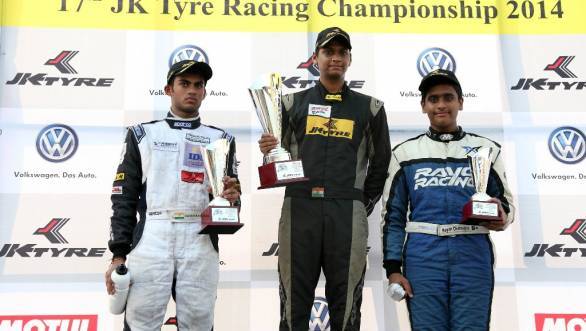 Race 2 proved to be a little more tricky than the first one for Vishnu, with Akhil Rabindra getting the jump on him at the start of the race. Vishnu managed to catch up to Rabindra and pass him to take the race lead though, and hung onto his place for the race win. Rabindra had to be content with second place and Krishnaraj Mahadik, 2013 National Karting Champion in the Junior category, finished third.

The third and final race in the FB02 class saw Vishnu stamp his authority on the field once more, taking a lights-to-flag win. The two other places on the podium were occupied by Rabindra and Mahadik once again. This means Vishnu Prasad currently leads the championship standings in the FB02 class. And while the first round of the championship saw him manage three wins of three races, things might not be as easy in the next round. This, because the reigning champion claims he expects the grid to close up as the other drivers slowly get used to the cars. In addition, the second round of the championship will also have the brothers Maini - Arjun and Kush - compete in the series once again. Arjun is currently competing in the British BRDC Formula 4 championship, a competitive series, and the seat time he will get there ought to hold him in good stead over the course of the domestic season of motorsport as well. 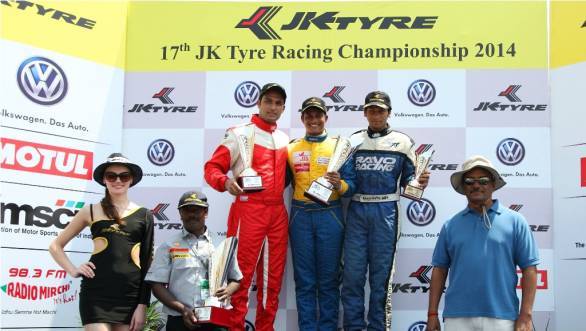 Diljith TS and Sudarshan Rao finished first and second in all three F4 races, with Ameya Bafna third in Race 2

Over in the LGB Formula 4 class, there was no match for Team Dark Don's Diljith T. The 2013 Toyota EMR champion won all three races over the course of the first race weekend in the series. Finishing second in all three races was Diljith's team-mate Sudarshan Rao. The final spot on the podium in Race 1 went to Rahul Rangaswamy, with Ameya Bafna finishing third in the second race. In the final F4 race, Vishnu Prasad took his first podium in that particular class all weekend. "The championship in this category has been slipping from my grasp each year and I've been trying very hard to win it," said Prasad. And while it might not have been the greatest weekend for him in the F4 category, Prasad seems out to prove a point and perhaps even take two titles along the way.