Meco Racing's Vishnu Prasad put on a brilliant show on his way to winning the first round of the 2015 JK Tyre Rotax Max National Karting Championship in the Senior Max Category. Vishnu was disqualified after the second heat on Day One owing to non-conformance with technical rules. As a result, he had to start the second day's pre-finals from P5. 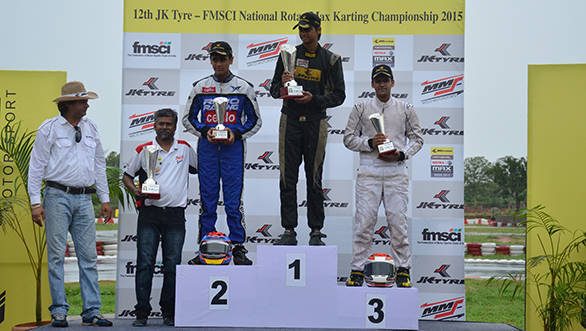 However, the experienced champion drove brilliantly in the rain and managed to move up the order for the final race wherein Nayan Chatterjee of Team Rayo Racing was in the lead for over half the race distance. Vishnu was second and closing in on Nayan with each passing lap. 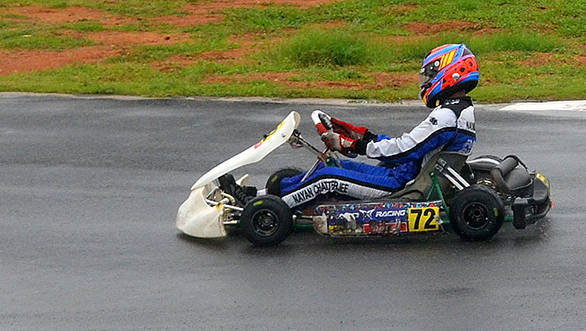 The final few laps were pure edge of the seat action as the two were engaged in quite a duel. Eventually, the experience and skill of Vishnu saw him move past Nayan with a few laps to go. "I made a small mistake and lost the lead," said Nayan after the race. There was no looking back then as Vishnu pulled away with a comfortable lead. Nayan, meanwhile, was coming under intense pressure from Dhruv Mohite from Mohite's Racing. By the time the chequered flag was waved, Vishnu maintained P2 with Dhruv in third. 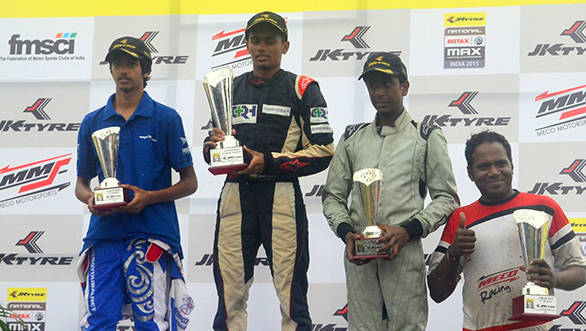 Akash Gowda, Mohammed Nalwala and Nirmal Umashankar on the podium for the Junior Max Category

In the Junior Max Category, Akash Gowda of Meco Racing won after a gruelling battle with his contenders. He was amongst the many who opted for slicks after the rain had let up and a dry racing line was clearly visible. 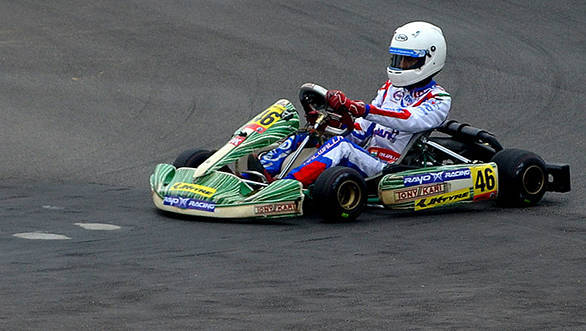 Mohammed Nalwala of Rayo Racing, who was on pole after winning the pre-final, lead for the initial laps. His gamble of opting for slicks seemed to pay off too. However, as the laps progressed, Mohammed began falling down the order. Akash took over the lead and Mohammed slid to fourth. However, during the closing stages, he dug deep and managed to claw his way back to second before crossing the finish line. Nirmal Umashankar finished third. 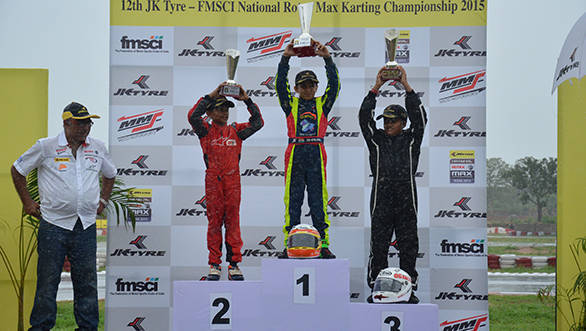 The Micro Max category was dominated by Agra boy Sahan Ali Mohsin. He won both the Pre-Final and Final races, leading from pole to flag. The young racer has been competing at the Asian level too and paddock talk suggests he will be one to watch out for. 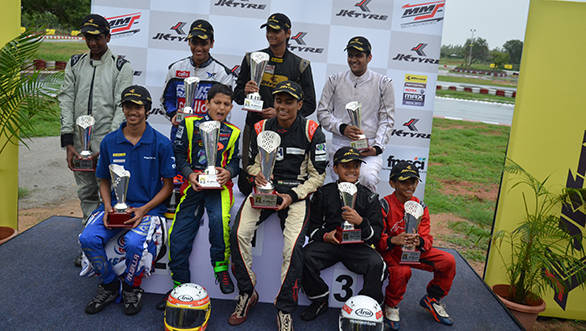 With Round Two set to take place from July 25 to July 26, 2015 at the Chicane Circuit, it would be interesting to see how the racers progress during the course of the 2015 championship.