Volkswagen Motorsport's foray into Indian rallying started earlier this year, when the company made available for rallying their 1.6-litre engined petrol Polos as a part of their Customer Sport Pilot Programme. Then, at the K1000, the fourth round of the 2013 Indian National Rally Championship, the Polo R2 made its debut, with Karamjit Singh behind the wheel. And now, taking things a step further, Volkswagen's GT TDI is all set to make its rally debut at the Chikmagalur Rally, the final round of the INRC being held between the 19th and 21st of December, 2013. 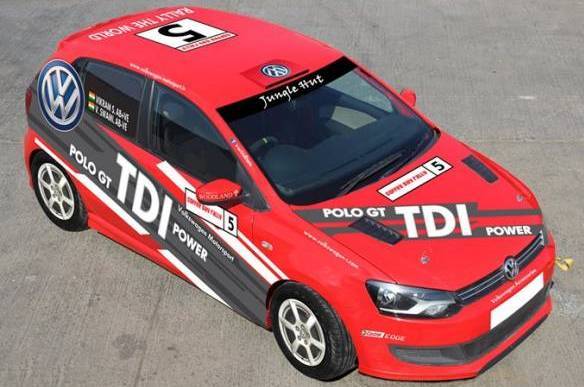 The GT TDI, also part of the German manufacturer's Customer Sport Pilot Programme, will make it to the stages of the Coffee Day Rally with Vikram Mathias behind the wheel of the Team Jungle Hut machine. The two-time INRC champion has so far only competed in two rounds of the 2013 season, first in Nashik and then at Coimbatore. Mathias will be navigated at the Chikmagalur Rally by Vivek Ponnusamy.

The Volkswagen GT TDI rally car is a stock Group N category car and comes powered by the turbocharged 1.6-litre diesel engine, of the same configuration as the recently launched GT TDI in that is has a power output of 105PS. The rally car, however, features performance suspension, uprated brakes, a remapped ECU and a free flow exhaust.

"The FMSCI had a diesel category open, but there weren't any takers for it. And at the start of the season we didn't have a car that we could introduce into this category. However, with the launch of the GT TDI, we have the right machine to go rallying in the diesel class," said Prithviraj Siddappa, head of motorsport, Volkswagen India. "The car is really powerful and reliable, so it really is the right move for us to make," he continued.

While Siddappa did admit that the car hadn't been tested much, he did declare that it was the rally itself that would be the true test of the GT TDI's rallying prowess. "We aren't really competing in the rally, we're testing the car at Chikmagalur," he said. Siddappa also added that the basic checks and running in of the car had been completed, while hardcore testing would happen during the event itself. Having an experienced driver like Mathias around to test the car and give the factory feedback would aid further development of the car.

While Vikram Mathias hadn't managed a drive in the car yet, the ever enthusiastic rally driver told OVERDRIVE "It feels good to be back." Mathias also went on to say that he didn't have any tie up for the 2014 season of the championship and would be keeping his options open.

Want to know how the Rally Spec GT TDI performs at the stages in Chikmagalur? Watch this space. Or better yet, head down to the Coffee Day Rally between the 19th and 21st of December!