The new Volvo S90 just revealed at the Detroit Motor Show will come with a highly advanced form of semi-autonomous driving, leading the charge for autonomous tech in the United States. The S90 takes the Pilot Assist feature first seen in the XC90 to its next level, allowing motorists to drive without having to keep their hands on the steering wheel at speeds of up to 80kmph and without having to need a pilot car ahead of it at all times. Keeping your hands off the steering wheel however, works for no more than some 6 seconds, after which the driver has to take back control in the interests of safety. 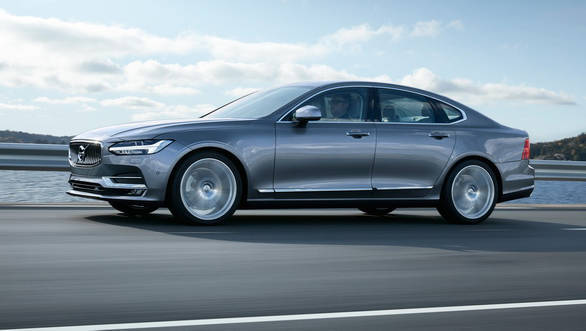 The S90 more importantly, comes with the second generation of a semi-autonomous feature called the Pilot Assist. PA allows a Volvo car to accelerate, decelerate, brake to a complete stop and steer by itself, but it needs to follow a car ahead of it and with proper lane markings to carry out these functions. With the next generation Pilot Assist which will be a standard feature in the S90, the car no longer needs a pilot vehicle ahead of it to drive itself in urban areas or on highways. It can execute these manoeuvres at speeds of up to 130kmph, risen from the 30kmph limit in the XC90.

Pilot Assist is based on a combination of several functions available in Volvo cars like Lane Assist and adaptive cruise control features. The Pilot Assist feature in essence, makes sure that under no circumstance will a Volvo car get into a collision with any other vehicle, person or object. The technology is another stepping stone for Volvo's Vision 2020 plan, the goal of which is to ensure that by the year 2020 no one in a Volvo car dies or is seriously injured.