Volvo Cars has announced that it will begin assembly of the plug-in hybrid XC90 T8, launched in 2016, at its plant near Bengaluru. With this announcement, it becomes the first company in India to locally assemble PHEVs (Plug-in Hybrid Electric Vehicle) in the country. 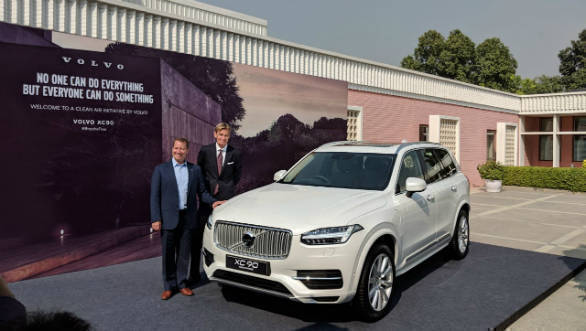 The AWD Volvo XC90 T8 is available in Inscription and Excellence trims at prices starting at Rs 96.6 lakh, going up to Rs 1.23 crore, ex-showroom. The XC90 T8 Inscription is powered by a 2-litre petrol engine, which works in conjunction with an electric motor on the rear axle for a combined output of 320PS and 400Nm, while the Excellence boasts of a turbocharged and supercharged powertrain with 407PS and 640Nm. The XC90 hybrid, in pure electric mode, has a range of 40km.

Both models, the Inscription 7-seater and more exclusive Excellence 4-seater will be assembled locally. We have been told that since the CBU models were competitively priced, the local assembly of these models will not result in a reduction in price. As before, Volvo will install two fast charging points for customers, capable of a full charge in a mere 2.5 hours.