What the Modi Sarkar can do for road safety in India

Our Prime Minister Narendra Modi, often addresses the nation on Mann Ki Baat, his programme on All India Radio. On July 26, he spoke about road safety and how an accident happens every minute on our roads and a death every four minutes. As per our Prime Minister, road accidents account for 1,31,400 deaths annually. The actual figure is much higher. In 2013, almost 1.5 lakh people were killed and close to 5 lakh were seriously injured or permanently disabled. The figure for 2014 is definitely much higher. More than 10 lakh people in India have lost their lives to road accidents in the last 10 years and we have the dubious distinction of leading the world in road fatalities.

Let's compare these figures with the losses our nation has suffered in the various wars it has fought with Pakistan and China. The total number of soldiers who have sacrificed their lives is about 12,000. The Kashmir insurgency has claimed some 50,000 lives till date. So the total deaths, due to these terrible wars and conflicts, have been about 62,000. Shockingly, twice this number lose their lives on Indian roads every year! The loss to the Indian economy due to fatalities and accident injuries is estimated at three per cent of GDP, some 62 billion US dollars. To put things in perspective, we spend 4 per cent of our GDP on healthcare, which means if losses due to road accidents are curtailed, we can almost double our spend on healthcare.

Given all this, I am truly delighted that Narendra Modi has spoken about road safety. The Modi Sarkar also says it aims to bring down road accidents by 50 per cent in the next five years. The Government plans to put before the Indian Cabinet, the new Road Transport and Safety Bill. Sadly with the logjam in Parliament, one is not sure when it will be introduced. It's also very unlikely that our politicians will pass the hefty fines and punishments proposed in the bill.

The PM said nobody comes to the help of accident victims due to fear of police harassment and this needs to change. Also when the victims reach a hospital, many times they are not treated because they don't have the money. Modi said his government will introduce cashless treatment for road accident victims. He also asked parents to educate their children about road safety. This is all very good and must certainly be done. But sadly, Modi touched only very briefly on prevention of accidents. It's almost like accepting that road accidents are inevitable in India. Taking care of accident victims is very important but even more important is to prevent accidents and injuries.

The biggest cause of road accidents is driver error. Yes, it is estimated that the drivers and riders are responsible for about 80 per cent of road accidents in India. Just take a look around you. We flout every known road safety rule. We drive, ride and cross roads without a care in the world. We are most undisciplined and the driving has become completely insane. It's almost like we have a death wish and have taken an oath, "Thou shall die in a road accident". 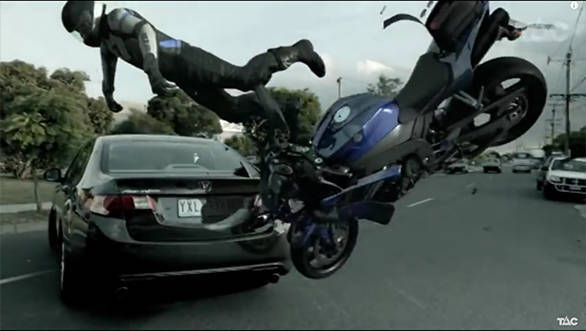 How do we stop this? To start with, we need proper driver training and strict tests for issuing licences. Traffic fines and punishment need to be increased (which is what the new bill proposes) and there must be strict enforcement of law with nobody being spared. The minimum fine for any traffic offence should be Rs 5,000 and up to Rs 5 lakh and long jail terms for serious offences like driving rashly and causing death. To prevent bribing of policemen and other authorities, the government should officially give the cops 50 per cent of the amount they collect in fines. They should also be given promotions and awards depending on the amounts they collect. I am sure if the cops officially start getting half of the fine amount and also recognition for doing their jobs properly, they will stop taking bribes. Of course people will rise in protest, unions will say our drivers our being harassed and politicians will jump in and rush to protect their 'vote bank', the common people of India. But to get the desired results, the Government must ignore all this and stay steadfast about enforcing the law and reducing accidents. After all it's the citizens of India that will benefit the most. But will the Modi Sarkar do this? So far we have seen lot of talk, but little action.

We also need scientific road design and maintenance, correct road markings and signage, proper vehicle maintenance and road worthiness, and compulsory wearing of helmets and seatbelts. And this must start at the very top. I have never seen any politician wearing a seatbelt, not even our Transport Minister Nitin Gadkari. Does Modi wear a seatbelt? I seriously doubt it. Not just politicians, no policeman wears a seatbelt and neither do any government employees. Most film stars also never wear a seatbelt or helmet. You also never see anyone with a seatbelt or helmet in any of our Bollywood films. Nowadays if you show anyone smoking in our films, it has to be accompanied with a message saying 'smoking is injurious to health'. So why no rule insisting everyone must wear seatbelts and helmets in Indian films.

Road sense and sensibility in India and abroad

A biker's death in Delhi