At the end of one of the most dramatic WRC rallies in recent memory it was the same old story. Volkswagens finished one-two with Sebastien Ogier at the head, scoring the team's seventh consecutive victory. Rally Guanajuato Mexico traditionally attracts one of the smallest entries of the season but as usual there were stories from every stage. On an event in which countless drivers went off the road the most encouraging story from the event was that of Thierry Neuville's Hyundai i20 WRC which finished third overall, the team's first WRC podium result. He had happily avoided the misfortunes which beset his rivals and was on the way to the finish when the car suffered serious overheating after the final stage. After a rally with no serious troubles Neuville coaxed his car to the finish with a lot of help from the event sponsor Corona His car finally only arrived after being topped up with beer from a large bottle ceremoniously donated to crews at the end of the final stage 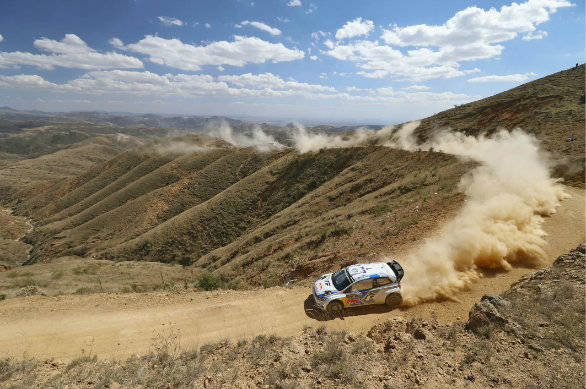 Ogier back to winning ways at Rally Mexico

Taking advantage of a better Day 1 than his teammate Jari-Matti Latvala, who started as championship leader and was running first on the road on Day 1, Ogier was unstoppable. He won 14 of the 22 stages, but his closest challenger was Mads Ostberg who was fastest on five stages and led for four stages on Day 1, but the next day he uncharacteristically damaged his car on Day 2 when lying second. His earlier steady resistance to the pressure from Latvala led to hopes that the Citroen team now had a car and driver which could give problems to Volkswagen, but it was not to be. Ostberg was eventually Citroen's highest finisher in ninth after Meeke had his second and final accident on the Power Stage at the end of the event, after lying fourth early on. M-Sport managed only fourth place with Elfyn Evans, itself an excellent result for a rookie to this event. After disappointment in Monte Carlo and Sweden Martin Prokop made it to the finish in fifth and as a privateer driver while the Mexican driver and 2012 FIA Production Car Champion Benito Guerra finish sixth, in front of Neuville' teammate Chris Atkinson. 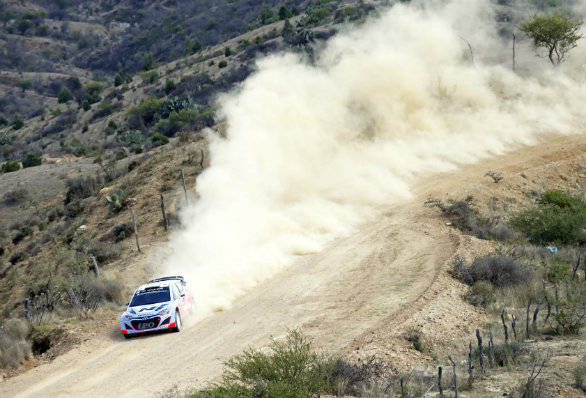 Mexico stands as the third and last event of the specialist rallies which traditionally open the WRC season. It features high altitude stages which sap the power and enhances reliability (only three cars failed to qualify as a finisher) but makes for unusual driving characteristics. The list of famous drivers who went off the road or damaged their cars was simply endless. Andreas Mikkelsen (VW) rolled, Kris Meeke (Citroen) twice broke his suspension in impacts, Robert Kubica (Ford) rolled his car on two occasions while Mads Ostberg on his first gravel rally with Citroen damaged his suspension. Two of the leading drivers in WRC2 also went off the road.

Once again new running order rules played a major hand, Jari-Matti Latvala suffering, but another new rule about where retired drivers would restart the next day showed its flaws. Drivers who bravely struggled on previous days were given disadvantageous positions compared with those drivers who retired (under Rally2) who were given advantageous positions. Then another new rule showed up. Drivers who retired on Day 2 were not eligible for Power Stage points while those who retired on Day 1 were. The old established rule that the extent of penalties for missing stages depended on which end of the day you retired still played a major role in the overall results of the event. These situations explained a lot of what happened on the rally. Chis Atkinson in the second Hyundai who completed every stage struggled with many teething troubles, and then also was to suffer from severely difficult running conditions. The need for caution was as strong as ever, witness how Elfyn Evans sensibly drove to fourth place, some consolation for the M-Sport team when third placed Mikko Hirvonen stopped with alternator problems when lying third overall, and eventually finished 8th. Official team M-Sport drivers have still to win a stage this season.

After struggling on the final day with a broken driveshaft on his Fiesta R5 Yuriy Protasov won the WRC2 category ahead of Lorenzo Bertelli in a Fiesta RRC. There were many expectations that Ott Tanak would do well but after a second place overall on the opening downtown stage in his Fiesta R5, he went off the road early on the Friday. He returned on Day 2 and went on to win every stage until the end of the event but still only finished fourth of the seven finishers in the category. Other early drivers in trouble Nicolas Fuchs and Quentin Gilbert, allowing the Protasov-Bertelli battle to continue until Bertelli lost four minutes with a puncture and then rolling the car. Bertelli eventually climbed back to finish second. There were no WRC3 competitors on this event. In the WRC tyre war, Michelin shod the winner but in WRC2 the quickest was Tanak (on DMack) who won 13 stages while Bertelli (Pirelli) won 5 ahead of Protasov (Michelin) on 4.

VW lead the Manufacturers' series by 55 points from Citroen. Sebastien Ogier holds a slender three points lead over team-mate Latvala (so Ogier must run first car on the road on Day 1 in Portugal) with Ostberg holding third place ahead of Mikkelsen. Evans in fifth place finds himself leading his team-mate Hirvonen by two points. In the WRC2 standings Protasov leads Bertelli, whose F.W.R.T. team is leading the Teams' Cup category. The season now returns to mainland Europe in a month's time in Portugal, where the championship will have entries from two major international championships, Junior and Drive DMack, and there is now hope that at least one competitor will drive a new French R5 car.